A review of The King's Grave: The Search for Richard III 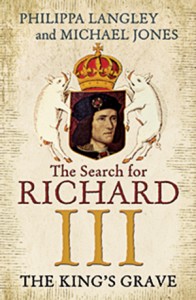 THE KING’S GRAVE: THE SEARCH FOR RICHARD III

By Philippa Langley and Michael Jones

On Feb. 4, 2013, experts in Leicester, England, confirmed that the bones of King Richard III had been identified, more than five centuries after he’d been killed on Bosworth Field. The discovery is due to the efforts of one woman: Philippa Langley. For eight years she overcame a series of increasingly large obstacles en route to finding the last English monarch to die in battle. Now, in this engrossing book, Langley and historian Michael Jones interweave her battle to uncover his bones with an evaluation of Richard’s tortuous life, death and afterlife. That includes how Tudor propagandists such as Shakespeare destroyed Richard’s reputation by painting as a murderous monster a man who, in reality, was certainly as ruthless as others of his time, but also known for being pious, brave and loyal.

No one had been sure where he was buried. Rumours had his body consigned to the River Soar while others reported he was buried in the choir of the long-vanished Church of Grey Friars. Interested in writing a screenplay on the monarch, Langley travelled to Leicester in 2004 to see the battlefield and the possible locations where Grey Friars may have stood, including a big parking lot belonging to the social services department. “I had goosebumps,” she recounts, “so much so that even in the sunshine I felt cold to my bones. And I knew in my innermost being that Richard’s body lay here.”

Knowing she’d never get permission for a hunt for long-lost royal bones that even she called “bonkers,” she tied it to something archaeologists and the city of Leicester wanted to locate: Grey Friars. Taking advantage of new research into Bosworth and the church, she tenaciously raised funds and got officials and scientists to sign on for a two-week excavation of three trenches in that car park. It was the longest of shots that parts of the friary and church could be found, and that one of those trenches would hit the choir. But on Aug. 12, 2012, a mere four hours into the dig, they found a body. It was Richard. He was lying a few feet from where Langley first felt those goosebumps.