Abel mines his family’s painful story, exploring the impacts of residential schools and intergenerational trauma, in a new literary work of poetry, art and archival documents 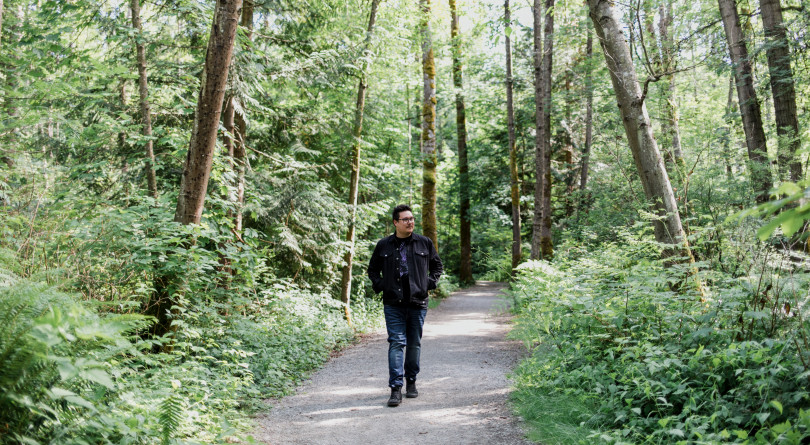 Nishga, the new book by award-winning Nisga’a poet Jordan Abel, uses poetry, visual art, analysis and family documents to create a dynamic mosaic of the artist’s journey to claim his own identity and name the things that torment him. The work examines the impact of residential schools (Abel’s paternal grandparents attended the same one), intergenerational trauma and the complexities of Indigenous identity. What he finds along the way spans the generations behind and in front of him. It digs up answers too painful to fully process and questions too complicated to fully answer. The result is an experience that leaves the reader feeling like a collaborator, digging along with the writer into both the solid evidence and the artistic representation of the ineffable. Abel’s previous collection, Injun, won the Grifﬁn Poetry Prize in 2017, while his debut, The Book of Scraps, won the Dorothy Livesay Poetry Prize. Deeply personal, beautiful and graced by staggering writing, NISHGA seems a culmination of earlier works by the author, who grew up off-reserve in Barrie, Ont., and Lethbridge, Alta. Terese Marie Mailhot, a writer from the Seabird Island Band in B.C. whose 2018 book, Heart Berries: A Memoir, was a New York Times bestseller and named a best book of the year by numerous libraries and publications, recently spoke with Abel about NISHGA.

Q: You speak about Indigenous stories as a form of testimony. This book offers not only poetic/artistic interpretations of the continuing effects of colonization, but actual documentary evidence and quotes. How/why is this inclusion of evidence important in your work?

A: I think this question really addresses the core of the book for me. NISHGA was such a difﬁcult book to write in part because I was constantly confronting these very painful archival documents concerning me and my family. That encounter with the familial archive, though, was so important for me in piecing together fragments of my past because I often had no other point of access. It was one of my primary ways into understanding my history, my family and, ultimately, myself. Where else do you turn to when the archive articulates something that is unarticulated by others?

Q: What speciﬁcally did you uncover in your archive research?

A: I am really just talking about a small box of documents, photographs and scraps of paper. At some point a number of years ago, I had asked my mother if she could share anything that could help me get a better sense of my father. She ended up giving me this box. A number of documents from that box ended up in the book NISHGA—although some were too painful for me to include or to return to. One of the biggest pieces that was missing for me—and one of the most important sections of the book in my mind—concerns the disappearance of my father. Here, the familial archive was able to articulate speciﬁcs that no one in my family was able to relay to me for what I assume were a bunch of different reasons.

Q: Residential schools perpetrated a wilful and violent disruption of familial ties as a means of control and dependence. I was wondering if you could speak to the discord between the ostensibly humanitarian mission of the residential school system sold to the white public—killing the Indian and saving the man, bringing Christ to the “heathens,” preparing Native people to thrive in a changing world, etc.—and the more nefarious and destructive secret ends that this system was trying to accomplish.

A: There must have been a desire at some point, however misguided, for residential schools to do some kind of good. When I was searching through the archives, I found many promotional pamphlets as well as internal materials that were deeply committed to presenting the work being done in these institutions as positive work. I honestly don’t know if that was ever really their intention. I keep circling back to a quote—one of many that I position at the beginning of NISHGA—by Duncan Campbell Scott. He said, “It is quite within the mark to say that 50 per cent of the children who passed through these [schools] did not live to beneﬁt from the education which they had received therein.” It’s difﬁcult for me to look past the outcome. All I can see and feel is the outcome.

Q: Your book deals speciﬁcally with the experience of displaced Native identity. For many Native people who, like myself, grew up on reserve, the horror of residential schools seemed almost elemental. Even if it wasn’t spoken about often, we felt its presence in the air. I wonder how that experience might have been different for someone who grew up feeling the pain of generational trauma but did not have the beneﬁt of a Native context to help process and explain it.

A: I always want to describe this experience as one of deep loneliness, isolation and confusion. Growing up displaced and disconnected from my community really did sever me from that Native context as you say. I honestly didn’t fully understand the impact of residential schools—or how my life was impacted by residential schools—until my early 20s. Before that I mostly felt very lost and unsure about how I ﬁt in, or didn’t ﬁt in, as an Indigenous person. Looking back on those experiences, I feel as though I would have really beneﬁted from some concrete information, and I also began to understand those experiences of loneliness, isolation and confusion as being part of the wake of violence that continues to spread outwards from residential schools. I don’t honestly know if that pain of intergenerational trauma would go away if I had more knowledge to fall back on, but I think being able to understand where that pain comes from, how it was shaped, which forces sparked it, etc., would have helped me to confront it. Without that knowledge, there were times where it really crushed me. Where I felt I had no way forward.

Q: The business of Native identity is, of course, complicated—especially for people who have been displaced from their communities. Every Native person has been asked, usually by a white person, “How Native are you?” I wonder if you have any advice on how one might go about answering this question, not for the asker, but for themselves.

A: I think for me that question is actually a lot of questions wrapped into one: “What’s your relationship, or relationships, to the Indigenous community, or communities,” and “What’s your relationship to Indigenous knowledge, languages and culture,” and also, “How visibly Indigenous are you and can you pass for being non-Indigenous.” Perhaps there are other questions here, too! I think the best way to approach it coming from a non-Indigenous person is perhaps to puncture the question and to ask them, “What does it mean to be Indigenous?” I always want to answer the question differently, though. I always want to say that I am Nisga’a but that I grew up disconnected and severed from Nisga’a territory [in B.C.], Nisga’a language and Nisga’a culture. I want to say that this is an experience of Indigeneity that is deeply misunderstood and underrepresented even though there are so many people in this position.

Q: How do you feel that our generation can best go about explaining and mitigating the effects of generational trauma for those who come after us?

A: There’s a moment in NISHGA where I am in dialogue with [poet] Sachiko Murakami and I suggest that education is the pathway forward. Looking back on that moment, I feel so conflicted because education in a very real way is exactly what brought us to this moment. But at the same time, I do think we need to break the silence. We need to continue to break the silence. Particularly in wake of the Truth and Reconciliation Commission, I want to say that that was not the only moment for speaking back. We need to have that moment over and over again. I do sincerely hope that the generations that come after us feel that wake of violence less acutely, but I also think that the only pathway forward is to continue to address it, to continue being aware of how certain forms of violence spill over from generation to generation. If we continue to heal and to teach healing, hopefully we can move beyond that shadow.

Q: You say that you resisted writing this book. And the process was obviously a difﬁcult one in many ways. I wonder if, now that it is done, you feel changed in some way—for better or worse.

A: At multiple points, I really did want to give up and never return to the text. Even now I ﬁnd it difﬁcult to read through this book, to encounter it again and again. But now that the book is done, I do feel a real sense of closure. I think this is one of those books that was a lifetime in the making. When I began writing my ﬁrst book, The Place of Scraps, NISHGA was a book that was on the horizon. I just didn’t know how to write it for the longest time. So, I do feel a sense of relief now that I’ve come to the end of something that I never thought I would see the end of, and I also really hope that this book will be genuinely useful to some folks.

Q: Since you’re working with such personal subject matter, how did you pace yourself in the writing of this book? When I’m dealing with trauma or my ancestors, it tends to take some time, and I take a lot of breaks. How did you do it?

This article appears in print in the April 2020 issue of Maclean’s magazine with the headline, “‘Piecing together my past.’” Subscribe to the monthly print magazine here.