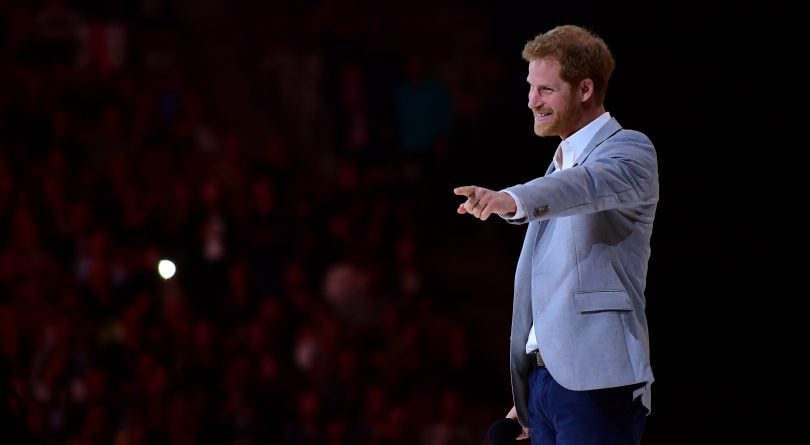 Prince Harry at the closing ceremony of the 2017 Invictus Games in Toronto. (Harry How/Getty)

With the announcement that Prince Harry will wed American actor Meghan Markle on May 19, interest in the celebrity couple’s courtship has hit a fever pitch. As has curiosity about the 33-year-old royal, who’s lived his entire life out in the public eye, often taking heat for his alcohol-fuelled missteps. With marriage on the horizon, and a full slate of royal duties in the works, has the so-called “party prince” put his hedonistic days behind him? Royal reporter Katie Nicholl’s well-researched new book, Harry: Life, Loss, and Love, takes a deep dive into the popular prince’s story, from the tragic death of his mother, Princess Diana, to his much-followed romance with the Suits star. In an interview with Maclean’s, Nicholl sheds light on Harry’s private life, away from the spotlight, with his mother, brother and family—and now, his future bride. The conversation has been edited for clarity and length.

You’ve covered the royals for years now. Tell me about the first time you met Harry.

I met Harry when he was 17 years old. I was a young show-business reporter, covering a party in London, and I’d gone outside to get some fresh air, and I literally bumped into Prince Harry. He was standing in the doorway, having a cigarette. He invited me into this VIP room, where he was having a private party, and of course I accepted. And I had this amazing insight into his life. The room was full of beautiful young blond things hanging on his every word. The vodka was flowing. Harry was the centre of attention, the raconteur, full of energy and life. Of course, he should have been revising for his A-levels [exams]. He wasn’t. He was out having a lot of fun, and I liked him enormously for that. I became instantly fascinated by him, and I’ve documented [his and Prince William’s] lives ever since.

In your book, you share an anecdote from Harry’s childhood; he was returning from tea with the Queen Mother and upset because the butler only brought sandwiches for her and William. How much did growing up “the spare” impact him?

He was very aware, from an early age. He was always treated that little bit differently, whether it was not getting the best sandwiches when they went to see the Queen Mother, to how he was addressed by staff, to the feeling that William got preferential treatment. Diana recognized that, and she always said to her staff, “You look after the heir, and I’ll look after the spare.” She recognized Harry just needed that extra bit of love, and she made sure she gave it to him.

In the past year, Harry has spoken very publically about his grief over losing Princess Diana. What has this unburdening meant for him?

The fact that it’s taken 20 years for him to finally speak publicly about his mother, and the loss that he suffered—the huge impact that that had on his life—I think must be incredibly liberating for him. He’s spoken about harbouring that grief, and having internalized it for so long, to the point that he was wanting to punch someone. He was that angry. It had all been so bottled up, for so many years. He revealed that he eventually sought counselling, on the advice of his brother. To hear a senior royal opening up like this was amazingly honest, very refreshing, and I think people only had great empathy and great respect for Harry in doing that. It was a very brave thing to do. I know there was some talk that the Queen felt there was too much soul-baring.

You also wrote about Harry suffering panic attacks. How big a deal is it for a senior royal to admit they have panic attacks at events?

Oh, it’s a big deal. I covered those engagements. Not once would I have ever perceived that he was suffering stage fright, suffering from a panic attack. He did what he did with great professionalism. Again, I think it was very honest—that he was able to admit that it actually wasn’t as easy as he made it look.

You haven’t shied away from Harry’s scandals here. I’m thinking of the time he wore a Nazi costume to a party…

You can’t airbrush those out of history. He has had trip-ups. He knows he should never have worn a Nazi outfit. Yes, he was young, but it was a big slip-up. And there have been others. Lunging for a paparazzo outside a night club, stripping naked in a game of strip billiards in Vegas, his underage drinking, his cannabis smoking. His life has been punctuated with these very public falls from grace over the years. But I think what’s so telling is that the public have been so ready to forgive Prince Harry. They like him. They love him.

When did he become an asset to the crown as opposed to a liability?

I think the turning point for Harry was when he left the military and gave up his army career, which was no easy thing to do. He loved the army. The military gave him a sense of purpose and a routine that I think he needed and he revelled in. But I think with that conscious decision to leave also came the decision to throw himself into his royal duties full-time—something that he and William had resisted for many years. When he decided that his heart was in it, he wanted to do it, and he found, through Invictus [a multi-sport competition for wounded soldiers], a way of marrying his royal duty with something he’s passionate about, then he became the real jewel in the crown. Then he showed us what he could do.

Another of his controversies involved an emotional statement defending Markle, back in the beginning of their romance, when she was subject to racist harassment. How unprecedented was that statement?

Absolutely unprecedented. It was like a stick of dynamite. It was so candid. It was so heartfelt. And very controversial, because here was Prince Harry, a public figure, pleading, really, with the media for privacy. Pleading for restraint. I suspect many advised him against issuing such a public statement, but Harry is headstrong. He felt it was his only opportunity to address the media head-on. And to protect Meghan.

Toronto played a starring role in the couple’s courtship. How does Harry like the city?

I was told he really liked it. He became very good friends with some of her friends over there, particularly the Mulroneys. I think he felt very relaxed in the city. He was able to travel to Toronto really very freely; he would always fly scheduled flights. He’d be able to go around pretty incognito, in a baseball cap. Obviously it’s a much smaller place than London, and people weren’t expecting him there. So I think it was a really happy part of their courtship, because they had quite a lot of freedom and anonymity.

How important were the Mulroneys to the courtship?

That’s one of the big reveals in the book, just how instrumental they were in the whole thing. I was told—and obviously Prince Harry hasn’t commented on this—that Meghan and Harry, they took shelter at the Mulroneys’ house when the story broke and it went global. Of course, Meghan’s apartment was under siege and Harry was in the city at the time. That they did stay with the Mulroneys and they were very well-protected, and well-sheltered, there. Ben, having been the son of a former prime minister, obviously knew about press intrusion, and knew how to hide them away. So I think the Mulroneys were pretty instrumental. I’m certainly expecting them to get good pews at the wedding, that’s for sure.

You include a lovely anecdote about Ben Mulroney sharing childhood memories of Princess Diana.

Yes, I loved that, too. I was told that by a very good friend of Ben’s. I just thought, “Gosh, imagine what that must have been like for Harry, to have that connection.” To know that his mother had sat upstairs in the nursery with the Mulroney children, telling them stories and chatting away with them, because she was bored of the political conversation downstairs. Harry would have loved that, I’m sure.

What has Harry found with Meghan that he hasn’t had in previous relationships?

The upcoming royal wedding is sure to boost the popularity of the royal family. Will it finally put Harry’s “party prince” reputation behind him?

I think the party prince reputation went quite a long time ago. I think Vegas was the final nail in the coffin. There wasn’t really any wiggle room for more slip-ups after that. He learned his lesson. He got his fingers burned. Anyone that covers the royals will tell you that he’s so cautious now. His inner circle is tighter than it has ever been. He protects his privacy more voraciously than ever, and I think that’s largely down to Meghan. So that “Hooray Henry wild royal rebel” tag, I think is long gone. This is the prince who wants to settle down. Who’s had that debauched time of his life, and is now ready—and looking forward—to embracing the next chapter of his life.