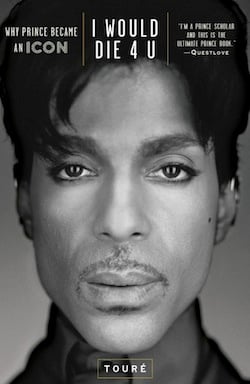 This slim volume about a one-name pop star by a one-name writer flirts with biography. But Touré—journalist, co-host of MSNBC’s The Cycle and sage author of Who’s Afraid of Post Blackness?—has a higher purpose. In a triptych of propulsive essays, he’s on a mission to crack the Prince enigma and canonize him as a preacher/provocateur who has liquidated lines of race, gender and genre with music that’s both carnal and Christian. Although Prince was born on the tail end of the baby boom, Touré holds him up as a mirror ball for the author’s own Generation X—a latchkey kid and child of divorce who became a hypersexual icon of diversity. Fearful of being ghettoized as a black artist, he has always cast his musicians as a multicultural mix of black and white, male and female. And despite his voracious heterosexuality, he has cultivated a gay mystique with high heels and eye shadow—the sensitive Machiavellian.

FILED UNDER: book reviews I would die 4 U prince rock biographies Touré