Q&A: Margaret Atwood on free will, safety and modern romance

In conversation with Margaret Atwood on freedom vs. security, government spying and her new novel, The Heart Goes Last 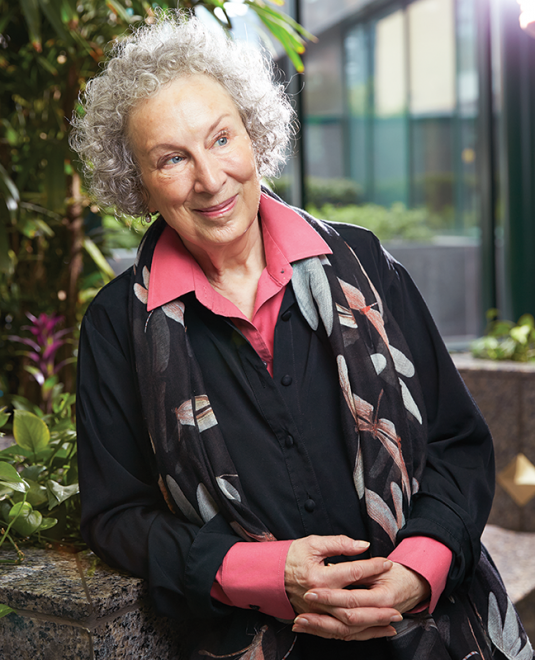 This interview by Rachel Giese was first published in Chatelaine:

If her legacy weren’t already assured by her more than 40 books — novels, essay and short story collections, volumes of poetry, children’s literature and non-fiction — Margaret Atwood has now guaranteed herself readers well into the 22nd century. In May, she became the first author to deliver a manuscript to Norway’s Future Library, a literary time capsule containing the work of 100 writers that will remain unpublished and unread until 2114. CanLit’s grande dame was the perfect choice to launch this quirky, forward-minded project. The 75-year-old, Twitter-loving, LongPen-inventing, comic-book-drawing Atwood has long embraced the new and novel, even if her own future worlds are dystopic ones, in which corporate interests run amok, hybrid animals are genetically engineered and poor women are forced to breed by the ruling classes.

The Heart Goes Last, Atwood’s latest book and her first stand-alone novel since 2000’s Booker Prize–winning The Blind Assassin, follows suit. Set in an only slightly alternative contemporary America, it tells the story of Stan and Charmaine, a married couple left homeless after an economic collapse. Enticed by the offer of good jobs and a nice home, they sign up to participate in the Positron Project in a corporate-run town called Consilience. The catch? Residents spend every other month in their civilian Pleasantville paradise, and the rest of their time as inmates in a massive and mysterious work prison.

As she did with The Handmaid’s Tale and the MaddAddam Trilogy, Atwood pushes current, real-life dilemmas to their logical and darkest conclusions. In the case of The Heart Goes Last, she takes on income inequality, the privatization of the justice system and government surveillance. As Atwood explains, “No one is ever really writing about the future, because we can’t know the future. My speculative fiction is a commentary on the past and the present.” Here, she reflects on free will, feeling safe and super-realistic sex dolls.

Aside from your husband, Graeme Gibson, this book is dedicated to three women: Canadian writer Marian Engel, British novelist and journalist Angela Carter and the American-Canadian science fiction editor and writer Judy Merril. Why them?

Well, I knew them all — they’re all dead now — and each of them had an approach to writing that was “Let’s not confine ourselves in too small a box.”

They also wrote about sexuality in ways that a lot of feminists didn’t in the ’60s and ’70s.

You know, I babysat Marian’s twins when she was writing that book. There’s a funny story about how it started. The Writers’ Union of Canada was looking at ways to raise money by putting together a collection of pornographic fiction by literary writers. Marian was the only one of us who turned out to be any good at writing about sex. The collection never happened, but her story turned into Bear.

Let’s get to your writing and The Heart Goes Last. It takes place in the fallout of an economic recession much like the one that began in late 2007, which was around the time you were writing Payback: Debt and the Shadow Side of Wealth. Has the issue of economic collapse been long on your mind?

Actually, when I was writing Payback, the economic collapse hadn’t happened yet, but the book came out in 2008, just as we were really feeling its effects, so everyone thought I had a crystal ball — which I kind of did. I had been looking at ads on the subway, as is my habit, for all those credit relief and payday loan companies, and I could see something was happening.

But for The Heart Goes Last, I had been thinking more about prisons, in part because of protests over the shutting down of prison farms. [In 2009, the Conservative government announced it would be closing its operating farms at six prisons across Canada. The program was one of the country’s most successful prisoner rehabilitation projects.] We haven’t really decided what prisons are for. Are they to punish people, to rehabilitate them, to give them a fresh start? Are they to protect the public? In some cases, the answer to the last question is yes — you don’t want Hannibal Lecter running around eating people. But in many cases, there is a knee-jerk reaction to imprison people, without looking at other options to address the underlying issues that drove them to commit crimes.

One of my models was Australia’s history as a penal colony. With only men at first, it was quite unruly, so the idea was to settle men down by sending them women. But there simply weren’t enough women in prison to meet the demand, so they lowered the bar, criminalized more behaviours and sentenced women more harshly to supply the demand. Today, now that we have for-profit prisons, they have to be kept supplied. It’s actually an incentive to create more criminals.

The shadow that hangs over the book is the choice between freedom and security. Stan and Charmaine have been in terrible circumstances, pursued by gangs of rapists and murderers. They opt to give up their freedom to have some sense of safety and stability. Consilience would have an appeal.

The good side for Stan and Charmaine is they’ve finally got a nice house.

And the bad side is that they spend half their lives in prison. That’s the compromise.

It’s a serious compromise and one that’s so old in how it’s played out over time. It’s one of the most primal questions: “What do I have to do to keep my family safe?” If we didn’t have those feelings, the human race wouldn’t be here. But the real question should be: “What is safety?”

Because those fears tend to get exploited?

Yes. Way more people are going to die from car accidents than terrorist attacks [but we’re more afraid of terrorism]. If you really don’t want people to die, reduce the speed limit or install blood-alcohol monitors that would prevent drunk people from driving.

You were very critical of Bill C-51, the Harper government’s anti-terrorism act that, among other things, gives unprecedented power to the government, police and security services to share private information about a person or a group seen as a threat to national security.

The problem with C-51 is there is no oversight and no recourse for people who are targeted. [The government can] wreck your life and there’s nothing you can do about it. One of the big ha-has about C-51 is that [the Conservatives] called the long-gun registry an intrusion of privacy, and they also called the long-form census an intrusion of privacy. But now with C-51, they’re going to spy on everything that we’re doing. It’s ridiculous.

In the novel, Stan and Charmaine also grapple with commitment and freedom in the context of their marriage.

It’s not just a political question. It’s a fundamental question for all of us — how much free will we actually have and how much we actually want. The answers are going to be individual. Some people don’t want that much choice. They want other people to make choices for them. Other people want infinite choice.

Speaking of infinite choice and intimacy, I want to ask you about sex in the book. Without revealing too much, there is a subplot involving the manufacturing of elaborately realistic sex dolls, which people have designed to look like anyone or anything they desire —

Which are in process right now. In Japan, they’re making them so realistic that they have goosebumps on their skin and human body temperature!

I think that people are afraid of rejection. But I read an article about people who buy these expensive sex dolls, and they say that they like them because there’s no hassle. No one’s bothering them, no one’s nudging them, no one’s laughing at them or asking them to take out the garbage.

That seems like a sad statement about modern romance.

It’s a sad statement about human isolation. The ultimate vision of our desire and increasing ability to control everything in our lives is that there are no other people in our lives. People do what they do — and some of it is really bizarre, and always has been.

I love the quote that I put at the beginning of the book from the journalist Adam Frucci. He wrote a story for the website Gizmodo in 2009 called “I Had Sex with Furniture,” about all about these weird new sex toys that are being developed. And he says in the story, “I did the deed with an inanimate object so you don’t have to.” In a consumer society, where it all comes down to whether or not you can pay for something, it all becomes acceptable. So the question is: How do you measure normal?

I just read that you’ll be contributing cartoons to Hope Nicholson’s anthology The Secret Loves of Geek Girls. Any advice or insight for women looking for love and romance?

I’m the wrong generation to ask! Every single item on the checklist has undergone radical change.