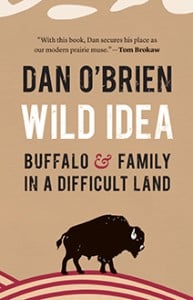 The creation myth of the Lakota Sioux doesn’t involve a Garden of Eden, warring Greek gods or a Big Bang. It involves buffalo.

According to South Dakota Sioux shaman Rocke Afraid of Hawk, life began inside Wind Cave. “We lived deep in a hole in the Earth,” he explains to O’Brien. “The people and the buffalo lived down there like brothers and sisters ’cause it was safe there inside Mother Earth.” Eventually the curious buffalo ventured outside the cave and discovered the many pleasures of North America’s Great Plains. The Sioux’s ancestors, however, were scared to leave the security of Wind Cave, so the buffalo made them a deal: “If the people come out of the hole to live with the buffalo, the buffalo will take care of them. They’re going to give the people everything they will need,” explains Afraid of Hawk. Hides for teepees, clothes and drums. Bones for tools. And plenty of food.

O’Brien’s efforts to rekindle this ancient interdependence between land, buffalo and mankind—what he calls “a buffalo-led ecological recovery strategy”—forms the central theme of this memoir recounting the inception of his now-successful online buffalo-meat business, Wild Idea. The characters and dilemmas he encounters in this quest are often as offbeat as his mission.

On the sprawling Cheyenne River Ranch in South Dakota’s Black Hills, O’Brien manages to raise a herd of grass-fed, open-range buffalo just like in the old days. Slaughtering them in similar fashion, however, presents some modern-day problems. Government regulations impose a two-hour time limit from death to cooler for commercial meat. To solve this problem, O’Brien builds Buffalo Girl, a portable butchering trailer he pulls directly into the herd. An ex-marine shoots a selected buffalo grazing contently in the field, then a Bobcat drags the animal into Buffalo Girl, where it’s skinned, quartered, chilled and certified by a federal meat inspector. Modern and efficient—and from the buffalo’s perspective, it likely beats getting run off a cliff. As O’Brien writes: “On our ranch we take care of the buffalo, and they take care of us.”