Max Eisen was barely 15 when the gendarmes came for him and his family in March 1944. He had been born into a large and prosperous Jewish family in 1929, in what was then Czechoslovakia, but in the dismemberment of that country in early 1939, their part had fallen to Nazi Germany’s ally Hungary. It was Hungarian police who gathered up Eisen’s extended family and bundled them onto cattle cars headed to Auschwitz. There, they were immediately separated. Max, his father and uncle were deemed suitable for slave labour; everyone else—his grandparents, his mother and aunt, his three younger siblings—went to the gas chambers. Within four months, the same fate befell his father and uncle when they became too weak to work. But Max endured not only the camp—with its beatings, starvation diet and grinding physical labour—but the death march of January 1945. As the Red Army approached, SS guards drove 60,000 prisoners westward for weeks without food or winter clothing, killing perhaps a quarter of them along the way. Four years later, Eisen was in Canada—and alone in the world.

By 1992, he was a husband, father, grandfather and successful retired businessman, and began a new life as a tireless Holocaust witness, talking to students of all ages across Canada. Writing his experiences eluded Eisen, however, and it took several abortive tries—and an increasing awareness of the passage of time—before he hit on a method in 2014. He would write his memories in pencil on 8½-by-12-inch sheets of paper folded in half, which his family members would type for him. This attempt worked, spectacularly in fact: Eisen’s searing memoir, By Chance Alone, an 86-year-old’s debut book, brought him a nomination for the $25,000 RBC Taylor Prize, which lists literary merit among its criteria. 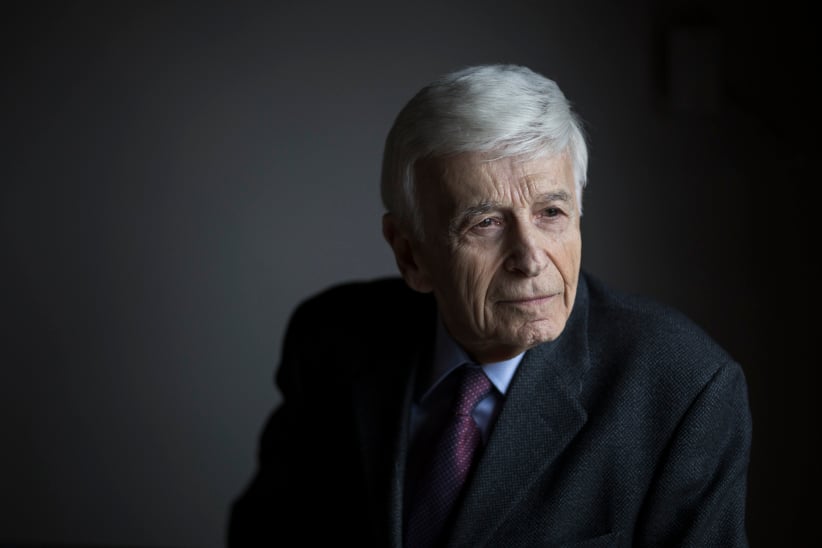 An excerpt from By Chance Alone

The next day, we were working in a deep cavity we’d dug; all the excavated soil formed a mound that hid us from view. This gave us a feeling of security, and we let down our guard. It was a dangerous mistake, because the mound also prevented us from seeing if anyone was approaching. At one point, we were loaﬁng carelessly, holding our tools in our hands, when suddenly two of my co-workers jumped up and furiously started to work again. I felt a blow on the back of my head. Although I did not feel any pain, there was a buzz in my ears and a feeling of dizziness overcame me. When I tried to pick up my shovel to resume working, I felt something warm dripping down my neck and I saw blood. I turned around to see an SS guard standing behind me, and I realized that I had received a blow from the butt of his gun. Our eyes locked for a second and I saw his twisted, evil grimace. I thought I was looking at the devil.

Blood continued to pour from the wound, and I went into shock and collapsed. The other prisoners hauled me out of the pit and threw me into a nearby ditch to keep me out of the way until the end of the day. The blood continued to ooze out of the wound, and eventually the under-Kapo, a man named Stasek, approached. He tore off a piece of my prisoner garb and told me to urinate on it and then put it on the back of my head. This bandage eventually stopped the bleeding, and I was thankful to him. Without his assistance and advice, I would not have made it back to camp.

I was no longer able to participate in the work detail. I tried, but my feet would not co-operate and my legs couldn’t hold me up. My thoughts ran on like a movie, a retrospective of my life up until that moment. I recalled my father’s parting words—about telling the world what happened at Auschwitz—and I knew I would not be able to fulﬁl his ﬁnal wish. My demise would be the end of the family Eisen.

When it came time for lunch, I watched from the ditch as the soup was ladled out, but I could not go there and no one would bring any to me. I was simply written off. At some point, Kommandant Kuntz probably received a report that our unit was down one prisoner, and he came to have a look at me. I thought he would pull his pistol from his holster and shoot me on the spot. Instead, he signalled with his right hand, his ﬁnger pointing up in a circular motion, meaning that I was going to go up the chimney of the crematorium. I understood that my fate was sealed. A feeling of helplessness and fright overtook me. How could I prepare myself to face the gas chamber? I would be reduced to a simple pile of ashes. I had always planned, as a last resort, to run to the electriﬁed fence and die by my own action, but this was no longer an option because I had lost my mobility. I began to wish that the Kommandant had put a bullet in my head. I thought of my family and how they must have felt while facing their own demise. When my mother entered the gas chamber, she had my three siblings in her care. How she must have fought until the last breath in that horrible chamber. What would it be like for me? Slow or fast? Would my soul leave my body? Would I meet my family again? Would they all be waiting for me? How would I know them? What shape or form would they be in? I felt utterly alone, with no one to take care of or comfort me. No one could save me.

At the end of the day, our work unit was lined up and counted. All the tools were loaded on the two-wheeled cart, and I was thrown on top. As the unit proceeded to march back to camp, I was acutely aware of what I saw and heard around me; it was the last time I would experience any of it. The cart was left in a shed with all the tools in it, and two inmates took hold of my arms and dragged me a short distance through the gates of the camp. Under-Kapo Stasek directed them to the hospital in barrack 21, where I was left in a hallway, near the surgery room.