During his long career, the author frequently wrote about the immigrant experience and being black in Canada 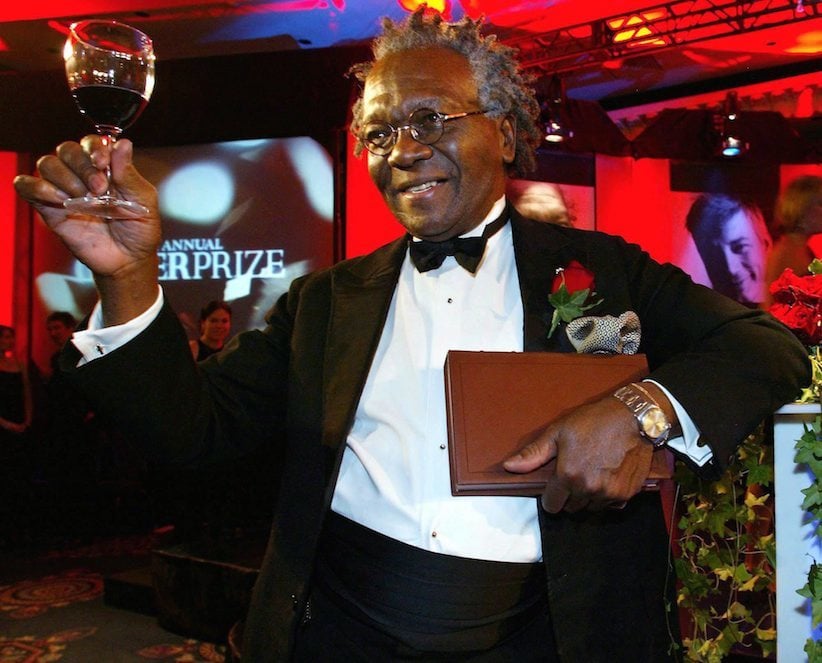 Giller Prize winner Austin Clarke hoists a glass as he holds a copy of his book the Polished Hoe after winning the $25,000 literary prize at the Four Seasons Hotel in Toronto in a November 5, 2002, file photo. (Kevin Frayer, CP)

TORONTO — Austin Clarke, the Toronto-based writer who won the Scotiabank Giller Prize and the Commonwealth Writers Prize for his 2002 novel “The Polished Hoe,” has died.

Over the course of his long career Clarke frequently wrote about the immigrant experience and being black in Canada.

“Certainly, there is no other black Canadian author who has been so heartily embraced as Austin Clarke,” wrote literary critic Donna Bailey Nurse in a 2003 profile published by the trade magazine Quill & Quire.

Austin Chesterfield Clarke was born in St. James, Barbados, and moved to Canada in 1955 to attend the University of Toronto. He soon turned to journalism and subsequently to fiction.

His first two novels were set in the West Indies: “The Survivors of Crossing” (1964) and

“Amongst Thistles and Thorns” (1965). “The Meeting Point,” released in 1967, focused on the lives of West Indian natives living in Toronto.

During the late 1960s and early ’70s, Clarke became a visiting lecturer at a number of major U.S. universities. He also worked as a cultural attache to the Barbadian Embassy in Washington.

He kept writing throughout, publishing “Storm of Fortune” in 1973 and “The Bigger Light” in 1975.

In 1975, he returned to his homeland to become general manager of the Caribbean Broadcasting Corp., returning to Canada in 1976. The next year, he ran unsuccessfully as a Progressive Conservative candidate in the 1977 Ontario provincial election.

In the ’90s, the accolades began coming. In 1997, his novel “The Origin of the Waves” won the Writers’ Trust Fiction Prize. And his 1999 novel “The Question” was nominated for the Governor General’s Award.

In 1998 Clarke was made a member of the Order of Canada.

The author was also the winner of the 1999 W.O. Mitchell prize recognizing his body of work.

But Clarke’s biggest moment in the literary limelight came in 2002. After 10 novels, five short-story collections and several books of memoirs, Clarke was awarded the Giller prize for “The Polished Hoe.” The novel tells the story of Mary Mathilda, a plantation owner’s black mistress who confesses to a brutal crime.

After he was announced as the winner, Clarke thanked his publisher and said he could not have become a writer without the support of his wife.

He related how he had told her about 40 years ago that he wasn’t going to work anymore.

“And like a real Jamaican woman she said ‘What are you going to do?’ And I said ‘I want to be an artist.’ The scream she emitted was heard in Jamaica, where her mother lived at the time.”

“I used to pretend that I was impervious to any emotion that came from that kind of recognition,” he told The Canadian Press in a 2008 interview.

“But now I am able, I suppose because I’m older, … to enjoy some of the desires that every writer certainly has in his mind when he is writing, that the book is successful and that the book wins a prize,” he said.

“I’m being proper in accepting life’s little wonders and gifts without being arrogant and criticizing them, either their frequency or their credence.”

“More” takes place during four days in which Idora Morrison does not leave her Toronto basement apartment. But in her thoughts the Barbadian immigrant, whose husband abandoned her years before and whose son has fallen into an unfathomable world of violence and gangs, relives her life.

Clarke’s agent Denise Bukowski says he died in hospital early Sunday morning, and a representative from his publishing house says a large funeral service is planned for July 9 at Toronto’s St. James Cathedral.