Born with beauty, brains and the benefit of a trust fund, Glenn Close's younger sister has spent most of her life suffering from mental illness 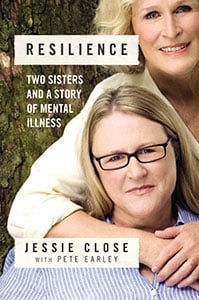 For most of her life, the younger sister of the actress Glenn Close couldn’t understand what was causing her to act so crazily. Jessie Close, a buxom natural blond, was born with every advantage in life—beauty, brains and the benefit of a trust fund—but, inside, she felt isolated and untethered. Her unorthodox parents joined a religious cult that led them to a life in Africa. Jessie dropped out of high school, married at 17, ran amok with drug dealers and burned through five marriages.

Her physician father suspected his youngest daughter suffered from depression. Jessie had tried to kill herself at the family compound in Zaire, where her dad was the personal physician to then-president Mobutu Sese Seko. Her father prescribed an anti-depressant, which helped with her periods of despair but did nothing to stop the frenzy that sent her spinning off on escapades of coke-snorting and promiscuous behaviour. During these phases, Jessie self-medicated with prodigious amounts of vodka.

It wasn’t until her teenage son, Calen, started hearing voices and acting out with hate-filled verbal abuse that Jessie got in contact with medical professionals capable of diagnosing a mental illness. Psychiatrists at the famous Mean hospital in Massachusetts determined that Calen had schizoaffective disorder, and that her own condition was a bipolar disorder.

Her memoir tells of all this in frank, gritty detail, often with the author questioning why no one saw her symptoms sooner. She unfurls a family tree in which seeds of disturbed thinking are easy to spot. Her great-uncle Seymour Worrall Hyde made Page 1 news in the New York Times in 1918 after he kidnapped four bystanders in Manhattan and forced his chauffeur to drive them to his estate in Connecticut. The hostages were pressured to undress and dance all night under threat of being branded with a red-hot poker. The caper got her multimillionaire uncle institutionalized, but he was released in time to withdraw his fortune from the stock market before it crashed in 1929.

Still, no one in Jessie’s immediate family spoke of mental illness or put together the pieces. “You would have thought that after Glenn starred in Fatal Attraction, our family would have had a serious discussion about mental illness. Even Glenn didn’t see the connection between the crazed Alex Forrester character she’d portrayed and me,” writes Jessie. Her book and her speaking engagements are designed to raise awareness and lift the stigma of an illness she struggled with for much of her life.