Book review: The Library Beyond the Book 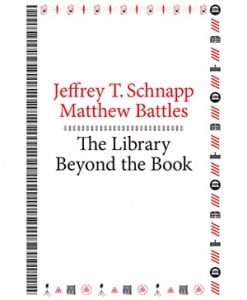 THE LIBRARY BEYOND THE BOOK

The greatest strength of this piece of cutting-edge academic thought from two scholars at Harvard’s metaLab (self-described as “a platform for emerging currents of experimental scholarship”), is its cheerful insouciance. Radio did not kill newspapers, TV did not drive radio into extinction, and so on: Whether you despise books as discrete, space-eating, distressingly physical lumps or embrace them for the same reason, rest assured: ebooks will not destroy books. Schnapp and Battles are at pains to emphasize their book is not about libraries after books, but beyond them.

The authors’ guiding guru is not some tech visionary, but a once-prominent American novelist, Francis Marion Crawford, who wrote a friend in 1896 that “the old-fashioned novel is dead; the literature of the future might turn out to be the daily exchange of ideas for men of genius, over the everlasting telephone.” Or maybe not. Another key theme in Beyond the Book is that the strongest correlation between predictions about the technological future is that they are all wrong.

So Schnapp and Battles keep a strong element of whimsy in theirs. Some readers, unable to police themselves, will be happy when a librarian enters a designated room with an Icebox—“an inverted boombox packed with WiFi jammers”—establishing an off-line zone. When a library visitor searches for a volume that proves temporarily unavailable, the book will “remember” that someone wanted it and will send out “a friendly text reminder whenever that patron passes nearby.” In every cluster of stacks there will be one book which, when handled, will be programmed to light up a family of 50 related books; the links will range from “thematics to typesetting to a user’s history.”

The authors’ Borgesian ﬂair serves to highlight, as it is meant to, a reality that has existed for centuries. The old ways have always been suspicious of the new: Socrates complained about the contrast between the living word and the dead letter 2,400 years ago as literacy became more widespread. But interaction between speech and its record hasn’t ceased. In a literary civilization, scholars strive to nail down precisely what was written, but then subtly change its meaning by arguing endlessly about context. We may be at a threshold of change in everything from how we read to the architecture of the places where we do it, but we’re only midway on a journey beyond the book and, Schnapp and Battles assert, “it’s midway all the way.”