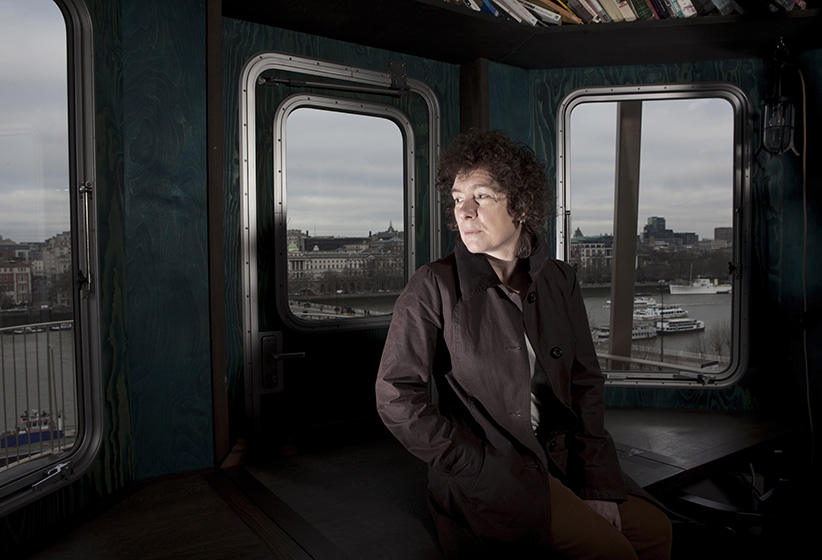 Winterson updates The Winter’s Tale, a play she has ‘known and loved since [she] was 16’, by replacing the king with a banker (Manuel Vazquez / Contour / Getty Images)

William Shakespeare may have dismissed “twice-told tales” as “tedious,” but the playwright, so notoriously ready to lift his plots from other writers’ works, was probably just fooling around with alliteration. By his own record, Shakespeare was all for authors revisiting their predecessors, as long, that is, as they did it his way: filling in the gaps with psychological intricacy and emotional nakedness, with the whole messy business of being human. That’s just what Jeanette Winterson does—literally and figuratively—in The Gap of Time, her self-described “cover version” of The Winter’s Tale, making this the perfect opening act for the Hogarth Shakespeare project.

Next year marks the 400th anniversary of the Bard’s death and, as says Winterson in an interview, “you won’t be able to move in Britain without running into Shakespeare trinkets.” Nor into ramped-up stage productions, at home and abroad, or such high-end literary tributes as the Hogarth series. For four years, the Hogarth Press, which can trace its roots back to the London publishing house founded 98 years ago by Virginia and Leonard Woolf, has been recruiting writers willing to write a modern novel “retelling” a Shakespeare play.

So far, eight have signed on. Some pairings seem natural fits: Margaret Atwood has The Tempest, while Jo Nesbø, the reigning monarch of Nordic noir, will take on Macbeth, quite possibly with a novel offering a body count that exceeds the original’s. Others are less obvious: Gone Girl author Gillian Flynn and Hamlet? “Psychological suspense, unreliable narrator,” counts off a cheerful Becky Hardie, one of the Hogarth editors behind the project. “Makes perfect sense to me.”

The combination of novelist and play is “a chemical reaction,” she adds. “We always had a game of  ‘Guess which play they’ll pick?’ and we’d always be wrong. Then, when they told us the one they wanted, it was always obvious.”

That’s probably a little exaggerated. It can hardly be that surprising to have Howard Jacobson, a Man Booker Prize-winning chronicler of British Jewish life, opt for The Merchant of Venice (Shylock Is My Name), or even to see Anne Tyler tackle The Taming of the Shrew in Vinegar Girl. (Both will be released in 2016, along with Atwood’s still untitled Tempest redo.) But obvious-after-the-fact surely describes the pairing of Othello and Tracy Chevalier, best known for Girl with a Pearl Earring, a novel set in a household gripped with jealousy, and King Lear with Edward St. Aubyn, whose Melrose novels eviscerate a dysfunctional upper-class British family.

And then there’s Winterson, 56, who has “known and loved this play since I was 16. The Winter’s Tale is about a foundling, which I was. It’s also extraordinary—and hard to stage—because everything happens off-stage, everything is in the gaps.” The author has fun with some of her updating: In the original, Antigones perishes in one of literature’s most famous stage directions, “Exit, pursued by a bear”; in The Gap of Time, he is chased to his death by more urban predators, a carload of gang-bangers. As for the central character, Leontes, “I had to think: Who would now behave as wildly as a king without a care for others’ lives? And I decided, ‘Better be a banker.’ ”

But Winterson is also intensely serious here, her love evident for the play’s hint of redemptive possibilities. She’s familiar, too, with its chequered reception since its 1611 debut. Leontes, who, in one of Shakespeare’s most famous metaphors, has “drunk and seen the spider”—meaning, internalized a poisonous thought (his wife’s imaginary inﬁdelity)—thereby yields to a monstrous jealousy. Unlike Othello, who had a demon whispering in his ear, Leontes had no reason for his belief, centuries of critics argued, and was thus unbelievable himself. It was not until Freudian times that the world at large caught up to Shakespeare, who knew better. But while he simply presented the king as he was, Winterson provides a backstory for her hedge-fund manager. It’s not enough to justify his crimes—it never is—but it does fill in the gaps, and sets the stage for a poetically charged, twice-told tale of time and forgiveness.

Exclusive excerpt from Jeanette Winterson’s The Gap of Time:

I saw the strangest sight tonight.

I was on my way home, the night hot and heavy, the way it gets here this time of year so that your skin is shiny and your shirt is never dry. I’d been playing piano in the bar I play in, and nobody wanted to leave, so I was later than I like to be. My son said he’d come by in the car but he never came.

I was on my way home, maybe two in the morning, a cold bottle of beer heating up in my hand. Not supposed to drink on the streets, I know, but what the hell, after a man’s been working nine hours straight, serving shots when the bar’s quiet, playing piano when it gets busy. Folks drink more when there’s live music, and that’s a fact.

I was on my way home when the weather broke in two and the rain came down like ice—it was ice—hailstones the size of golf balls and hard as a ball of elastic. The street had all the heat of the day, of the week, of the month, of the season. When the hail hit the ground, it was like throwing ice cubes into a fat fryer. It was like the weather was coming up from the street instead of down from the sky. I was running through a riddle of low-fire shrapnel, dodging doorway to doorway, couldn’t see my feet through the hiss and steam. On the steps of the church I got above the bubbling froth for a minute or two. I was soaked. The money in my pocket was stuck together and my hair was stuck to my head. I wiped the rain out of my eyes. Tears of rain. My wife’s been dead a year now. No use in sheltering. Might as well get home.

The hospital installed it a year ago. I watched the builders day by day while I was visiting my wife. I saw how they poured the concrete shell, fixed the steel box inside the shell, fitted the seal-shut window, wired the heat and light and the alarm. One of the builders didn’t want to do it, thought it was wrong; immoral, I guess. A sign of the times. But the times has so many signs that if we read them all we’d die of heartbreak.

The hatch is safe and warm. Once the baby is inside and the hatch is closed, a bell rings in the hospital and it doesn’t take long for a nurse to come down, just long enough for the mother to walk away—there’s a street corner right there. She’s gone.

I saw it happen once. I ran after her. I called out, “Lady!” She turned round. She looked at me. There was a second, the kind that holds a whole world—and then the second hand moved on and she was gone.

I went back. The hatch was empty. A few days later my wife died. So I don’t walk home that way.

I did some research. In Europe, in the Middle Ages, whenever that was, they had BabyHatches back then. They called them Foundling Wheels; a round window in a convent or a monastery, and you could pass a baby inside and hope that God would take care of it.

Or you could leave it wrapped up in the woods for the dogs and wolves to raise. Leave it without a name but with something to begin the story.