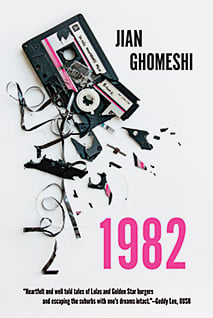 Jian Ghomeshi, heartthrob musician turned suave CBC radio host, is now indisputably cool, but it was not always thus. In 1982, he was a gangly brown boy in a white Toronto suburb, who idolized David Bowie and had the eyeliner to prove it. He avoided cigarettes because he was asthmatic and because a doctor warned him his lungs couldn’t handle them, but 14-year-old Ghomeshi made sure his clothes reeked of smoke for social credibility. He wore vintage clothes in the new wave style, even when it perplexed his Iranian immigrant parents (“You are wanting to look like beggar?”). Yes, this was a teenage time of angst before adult fame, but life was simple: it was about the music, man, and girls, too.

The year charted by the memoir sees young Ghomeshi explore his musical passion and struggle with adolescence. He isn’t as white as he wants to be or the aspirant engineer his parents want him to be. A cute neighbour never manages to grasp that Iranians are not Arabs, though he excuses her ignorance because she wears “tight jeans.” Tormentors call him “Paki” and ask where his turban is. Music sets him free. He describes the ecstasy of discovering a new favourite band at a live concert beside the girl of his dreams. Later, he and his best friend stake out a recording studio for weeks to catch a glimpse of rockers from the band Rush. When “bassist extraordinaire” Geddy Lee eventually walks by and waves his arm in greeting, the young super fans are too stunned to reciprocate.

The book suffers from one rather large problem: it is addressed to teenagers who will probably not appreciate most of its cultural references. His subject is the timeless teenage quest to be cool, but at times the book feels like an excuse to write about his favourite ’80s bands. The wafer-thin storyline—loser likes girl, gets hip, gets girl—punctuates far richer tributes to the tunes of David Bowie, the Clash, and Talking Heads. Ghomeshi had crushes on girls, but he loved music.