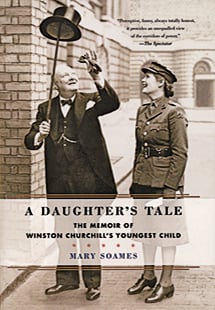 Canadians aren’t at all used to thinking of their longest-serving (and most peculiar) prime minister as “quite a cozy old thing,” but that is how William Lyon Mackenzie King struck Winston Churchill’s youngest child, Mary, when they met. Baroness Soames, now 89, was only 20 when she accompanied her father as an aide-de-camp to the crucial Quebec conference of 1943. Soames, who went on to a distinguished career as an author and philanthropic patron, was a keen observer of all the high policy and historic drama of the trip, but also, as her engaging diary entries show, of the personal and particular.

There were admiring words for Orde Wingate, the brilliant commander of the guerrilla forces in Burma, but none for Mrs. Wingate (“a bore and a prig”). FDR charmed Mary, as he did everyone, at least until his endless store of anecdotes began to bore; still she recorded her appreciation of the “violent cocktails” the “cute, cunning old bird” of a president concocted. Fishing in the Laurentians with several British chiefs of staff, Soames ruefully notes her day’s catch: “one fish, one sardine, and the same guide four times.”

She later participated in other historic summits with her father—meeting Truman and Stalin at Potsdam in 1945, for one—but Quebec was the culmination of a childhood full of encounters with the famous. Soames recalls the treat of being allowed to stay up in 1931 to dine with Charlie Chaplin, who amused the other guests with his impression of Napoleon. (Almost a decade before The Great Dictator, the comedian was evidently already interested in mocking tyrants.)

Mary never saw events from within as a participant, nor from afar like a servant, but she was the first to hear of Churchill’s relief when he met Truman after the shock of FDR’s death. The two men spoke “the same language,” the prime minister told Soames. “He says he is sure he can work with him. I nearly wept for joy and thankfulness.” Her perspective, in short, was unique, and so too is her contribution to history.