REVIEW: A Difficult Woman: The Challenging Life and Times of Lillian Hellman 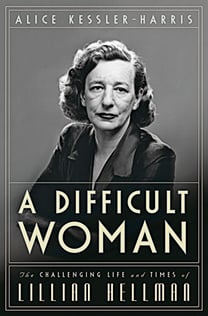 What to make of Hellman, remembered as a commie playwright who enjoyed a sexual liberation from the 1920s onward? She earned her own fortune writing a few of the best American plays of the 20th century (The Children’s Hour, The Little Foxes), she pushed the boundaries of dissent by defying the House Committee on Un-American Activities in 1952 and wrote a trio of bestselling memoirs that caused a scandal. Is it any wonder she became a lightning rod for misogyny, red-baiting and character assassination? This book is not a biography, but a thoughtful examination of why Hellman’s reputation has gone through highs and lows in both literary circles and public opinion.

Kessler-Harris has no trouble proving Hellman was a difficult woman—tempestuous, demanding, parsimonious and vengeful. “Such qualities, often forgiven in death, might have been judged differently had Hellman not been female, or a displaced southerner, or come from a Jewish background or appealed to highbrow rather than middlebrow audiences. But Hellman was all of these things,” says the author, who is not so much an apologist for Hellman as a referee when the accusations start flying. Why did Hellman never renounce (loudly enough) Stalin’s purges? Didn’t that make her a self-hating Jew? How could this plain-looking woman demand so much sexual freedom?

The book keeps us moving toward Hellman’s redemption as a (reluctant) feminist icon of the 1960s and 1970s. “Wearing or not wearing a bra is terribly unimportant. It’s being able to buy that bra yourself—that’s important,” said Hellman, who had reframed herself as a patriotic champion of dissent. But public opinion swung away from her one last time in the 1980s: the writer Mary McCarthy accused Hellman of being a liar on The Dick Cavett Show and there was a libel trial. Hellman’s reputation never fully recovered.

There is no lack of drama covered in this book, yet it reads a little dull. Kessler-Harris never resorts to Hellman’s style of melodrama, but this reader sometimes wished she had.