REVIEW: All Gone: A Memoir of My Mother's Dementia. With Refreshments 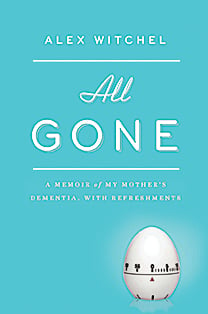 It takes a confident writer, indeed, to start a memoir with three pages about meatloaf. So opens All Gone, a funny and poignant book about Alex Witchel’s mother’s battle with dementia. That’s the official topic, anyway, but All Gone is much more. It’s a feminist history of her mother’s professional ambition at a time when ambitious women were suspect. It’s a collection of soothing family recipes (try Nana’s potato kugel) and it’s a reflection on Witchel’s own impotence to heal her family.

While other mothers looked askance in her direction, Barbara Goldfein (b. 1931) taught elementary school in Passaic, N.J., and completed her doctorate at Rutgers before teaching psychology. She was a meticulous dresser who preached good posture and manners. With a husband and four children to feed, Barbara soon found her kitchen duties an annoyance: “By Sunday brunch . . . you could actually taste the hostility she imparted to a tomato omelette.” Turning to cooking for solace during her mother’s illness, Witchel, who eventually became a food writer, concludes sadly that food is a fraudulent healer. After cooking all the family recipes, she still misses her mom, who is alive but lost to the disease—something referred to as an ambiguous loss. It’s a peculiar kind of loss that Witchel shoulders unevenly. It took three years for her to stop considering her mother’s condition a personal failure or a betrayal.

The book is a complex mother-daughter love story with occasional appearances by her father, her siblings and Witchel’s husband, Frank. But two things in this memoir seem out of place: the airing of a disagreement with an ex-friend sounds like petty, public score-settling, since everyone in New York media circles will know who she’s talking about, and Witchel’s career tips. The latter would be better showcased in a separate book. But readers mightn’t mind. They’ll be too busy enjoying the surprisingly succulent meatloaf.