REVIEW: All We know: Three Lives 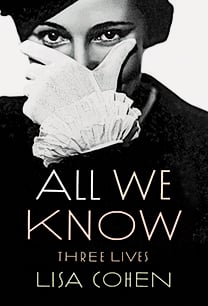 This is a triple biography of three remarkable women, all glittering social successes in the 1920s and ’30s, all lesbians who ran in the “Sapphic “ circles of the day. All are forgotten today.

Cohen’s aim, she says, is to bring them back to public notice because each, through her passions and preoccupations, is “a storehouse of modern anxieties about what we call failure, irrationality and triviality.”

Esther Murphy is the failure, a woman of immense potential who was, sadly, all talk. She dominated literary New York—a pal of Dorothy Parker, Scott and Zelda Fitzgerald, Nancy Mitford—at first enthralling onlookers with her disquisitions on history, literature and politics, ultimately boring everyone because she simply wouldn’t shut up. (The book’s title is a reference to the words that typically began a Murphy monologue: “All we know,” she’d begin, taking deep drags from her cigarette before launching forth.) She should have left a valuable body of work. Instead, the last 15 years of her life were spent reworking shards of a biography of Madame de Maintenon, Louis XIV’s influential second wife.

Mercedes de Acosta’s pursuit of celebrities—among them Isadora Duncan and Greta Garbo—certainly has elements of irrationality. She is remembered with scorn, as a seductress who wormed her way into the lives of these stars. Cohen’s mission is to provide a more nuanced interpretation of a clever woman who felt compelled to both worship from afar yet insinuate herself into their lives. Her legacy? A 5,000-item collection—letters, clothes, photos, keepsakes—that resides in Philadelphia’s Rosenbach Museum and Library.

As fashion editor of British Vogue (amusingly nicknamed Brogue in her day), Madge Garland was instrumental in bringing sophistication to what was then regarded as frippery—she published Virginia Woolf and sat for Cecil Beaton. She was the first fashion journalist to show her readers how fashion really worked. Yet her life, too, ends in disappointment. Certainly, All We Know is a labour of love rather than essential reading. But Cohen, a teacher at Wesleyan University, succeeds in her mission. These women are invisible no longer.