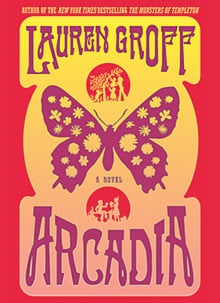 To the outside world, a commune can be something of a freak show, easily misunderstood and dismissed. And the inhabitants of Arcadia, the 1970s-era western New York commune that serves as the world of Lauren Groff’s novel, appear to fit the bill, what with the living in a ramshackle mansion, the fluid sexual relationships, decided lack of money, and dark charisma of a leader named Handy, whose word is law, decreed with seduction and occasional violence.

For Bit, the novel’s narrator, Arcadia is the only world he knows. He was born not long after the commune’s own birth to parents Hannah, a dreamy-eyed historian, and Abe, a more earthbound carpenter. Through Bit’s childlike viewpoint we see Arcadia for the promise it holds but also its inevitable collapse: its denizens grow restless, longing for what lies beyond the mansion’s borders. Inner turmoil and dwindling finances spoil what began with noble intentions, and as Bit grows up he finds himself thrust into the terrifying spotlight shone upon him by larger cities and greater conflicts.

Arcadia demonstrates the possibility of idealism made manifest. Just because a utopian society may be destined to fail doesn’t mean it’s not worth trying, as Groff (also the author of a previous novel and short story collection) demonstrates in languid prose and with wise observations about human behaviour. The denizens of Arcadia believe themselves to be pioneers. And many years later, when barely remembered by anyone other than Bit, the lessons he learned as a child, and the feeling of community won and lost, linger with him—and us—to the very end.