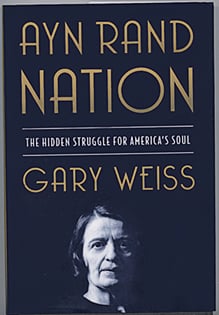 For anyone who remembers Ayn Rand (1905 to 1982)—the founder of objectivism and prophet of unfettered capitalism—only from her late 1950s days of glory to her relegation to the intellectual sidelines a decade later, Weiss offers a book full of surprises. Rand’s works actually sell like frozen peas, especially her two famous novels, The Fountainhead (1943) and Atlas Shrugged (1957): polls show that about a third of Americans claim to have read the latter. But The Virtue of Selfishness (1964)—Randian dogma demands, inter alia, that social welfare programs like Medicare and indeed the government itself (except for policing) be abolished—and other non-fiction tomes are also selling briskly.

Aside from Rand’s overall resurgence, part of a rise of libertarian thinking in the U.S. (and Canada), there is her particular appeal to the Tea Party: she’s “as much a part of the Tea Party’s soul as Ronald Reagan, Glenn Beck, and Jesus Christ,” according to the alarmed Weiss, a leftist financial journalist. And that’s certainly surprising, because Tea Partiers are overwhelming religious, while Rand’s atheism is strident enough to make Christopher Hitchens’ assault on Mother Teresa look tepid. Then there’s the disproportionately Canadian presence among her chief acolytes, especially during Rand’s lifetime, some of whom later became objectivism’s chief heretics.

But nothing’s more surprising than the way Weiss occasionally finds himself in kind of, sort of, oh-my-God-she’s-right agreement with Rand. He does emerge with his core principles intact: a Randian U.S.“would resemble the lands from which our ancestors emigrated.” But he recognizes the root of her appeal: preaching rugged individualism taps into deeply held American values and so too does the way Rand’s adherents make moral arguments, declaring policies right or wrong rather than prudent or reckless. That’s what Weiss wants his side to do: not ignore “the godmother of the Tea Party” or argue about practicalities, but take its own moral stance, based on its own reading of American tradition.