REVIEW: Ballerina: Sex, Scandal and Suffering Behind the Symbol of Perfection 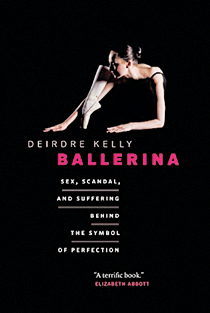 Ballerinas accidentally set aflame. Ballerinas traded like horses by wealthy male patrons. Ballerinas amassing fortunes as courtesans. Deirdre Kelly’s new book delivers on its juicy title, providing a thoughtful history of the ballerina as social construct—the idealized woman. Looking behind the artifice, she describes the starvation, humiliation, exhaustion, sexual exploitation and poverty that have plagued ballerinas through the ages.

Poverty and pregnancy were the chief occupational hazards in 17th- and 18th-century France, when the cult of the ballerina took flight. Successful ballerinas were usually kept women, often with multiple wealthy lovers. Kelly’s book is enlivened with mini biographies of the most (in)famous ballerinas and their cruel stage masters. The author reserves her harshest criticism for the megalomaniac choreographer George Balanchine (1904-1983), who told his dancers to “eat nothing.”

Mikhail Baryshnikov comes off as even more sexist and demanding than his character on Sex and the City. But Kelly, a staff dance critic at the Globe and Mail for 16 years, is at her best when cataloguing injustices done to Canadian ballerinas. She outlines the professional hardships of dancers Gizella Witkowsky, Kim Lightheart and Patricia Neary, and she details the behind-the-scenes story of ballerina Kimberly Glasco, who made front-page headlines by launching—and eventually winning—a wrongful dismissal lawsuit against the National Ballet of Canada in 1998. Kelly often cites her own newspaper and magazine articles for these controversies, so they aren’t new revelations, but when grouped together in this fashion, they’re highly effective at painting a picture of ageism and suffering at the ballet bar.

Although Ballerina reads as a cautionary tale, the book ends on a positive note. She sees a trend toward more muscular, less emaciated dancers. Some even take maternity leave, Balanchine be damned.