REVIEW: Confront and Conceal: Obama's Secret Wars and Surprising Use of American Power 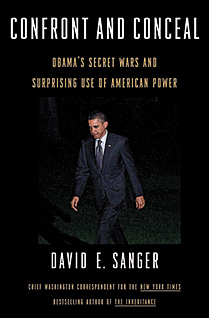 For a President whose election campaign—justifiably or not—attracted so much international hope, Barack Obama’s foreign policy is now coldly dispassionate, narrow in its ambitions, and driven almost exclusively by a desire to protect and enrich Americans at home rather than improve the lot of anyone overseas. The Obama doctrine is modelled more on Kissinger than Kennedy.

Obama came to office declaring that Afghanistan was a “war of necessity” and backed that pledge with a surge of troops. America’s approach to counter-insurgency would be troop-heavy nation building. Canadians, paving roads and patrolling footpaths in Kandahar province, were part of a larger plan to win hearts and minds by protecting the local population. It was a more dangerous strategy than hunkering down inside large fortified bases, and Canadians died carrying it out.

Then Obama balked at the cost and the difficulty and backtracked. In 2010, the White House organized a committee to narrow American goals in Afghanistan. The group called itself “Afghan Good Enough”—and good enough would be an Afghanistan that was home to just enough American troops to keep al-Qaeda off balance. Afghans could build their own damn schools.

This doesn’t mean Obama is timid when he feels America’s security is at stake. He’s unleashed far more drone strikes than George W. Bush ever did; he’s increased pressure on Iran with sanctions and covert cyberattacks; and he sent commandos deep into Pakistan to kill Osama bin Laden.

David Sanger’s book—well written and researched—is sympathetic to Obama’s desire to refocus America’s foreign policy and end the international mission creep of the Bush presidency. America had overreached and needed to concentrate on its many problems at home.

And yet Obama inspires embattled democrats abroad a lot less now than he once did. He doesn’t have much to say about Afghan democracy or Palestinian statehood these days. When Iranians rose up in 2009 to protest a stolen election, Obama offered a quote from Martin Luther King Jr.: “The arc of the moral universe is long, but it bends toward justice.” It was vintage Obama. It sounded great but essentially meant: “You’re on your own.”