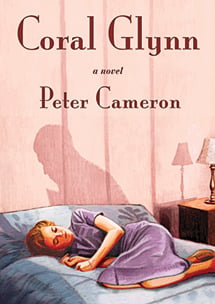 “That spring—the spring of 1950—had been particularly wet.” That’s the first sentence of Coral Glynn, Peter Cameron’s sixth novel, and it serves to contrast the verdant life around Hart House, a manor home in Leicester, with the illness and tension within. The only one who cares to engage with the outdoors is Coral Glynn, a private nurse who has come to ease the passing of elderly Edith Hart, who will soon die of cancer. There are two other occupants: Maj. Clement Hart, Edith’s son, a handsome man whose legs were damaged in the war, and Mrs. Prence, the shrewish housekeeper. In other words, all the elements of the sort of English period piece usually situated in the 19th century: the dying matriarch, the handsome young master, the testy family retainer and the innocent nurse, Coral Glynn. She would be the heroine were this a romance. It is not, or at least not in the conventional sense.

The inhabitants of Hart House are a peculiar lot. Coral is unworldly to an alarming degree, too clueless, really, to have much of a personality. She has no family, friends or ambition. Clement runs her a close second, believing no woman could behold his withered limbs without revulsion. And yet a relationship develops, formal, awkward, filled with stops and starts. So what a shock it is to Coral when, hours after Mrs. Hart succumbs, Clement proposes marriage (then, being Clement, promptly apologizes). In a muddle, Coral goes out for a walk, where she witnesses a major plot development, then returns to the house and accepts Clement’s offer.

A simple story of lonely, repressed people, it seems. And yet, there are many jogs and jags on the path ahead: murder, rape, theft and treachery all come into play. And that is one of the chief pleasures of Coral Glynn. It unfolds in entirely unexpected ways—almost as though no one has told it that there are fictional conventions to be honoured. It is a quiet, slight book at 220 pages, but it will stay with you long after Coral and Clement have gone on their way.