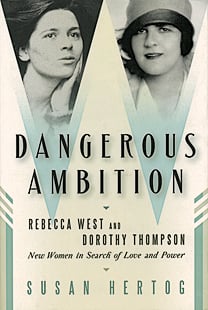 Rebecca West and Dorothy Thompson saw two world wars, political ructions across Europe, and social upheaval in England and North America. They documented it all: West, in England, Thompson, in America.

Over the course of seven decades, West wrote 25 books, including her masterpiece, the 1,200-page semi-autobiographical Black Lamb and Grey Falcon, published in 1941. Thompson was named by Time as the second most influential woman in America after Eleanor Roosevelt. In 1934, she was the first foreign journalist to be expelled from Nazi Germany. Today, their work is forgotten. They are better remembered for the men in their lives: West had a long, fraught relationship with the much older H.G. Wells (and less famously had affairs with Lord Beaverbrook, the Canadian press baron, and Charlie Chaplin); Thompson married three times, most notably to the brilliant but ruinously alcoholic novelist Sinclair Lewis.

Hertog’s book is an unusual project: a dual biography. It draws exhaustively, often exhaustingly, on the careers of these driven and unhappy women and the minutiae of their lives. What makes the book fun is that both women loved a good gossip, hobnobbed with the best and brightest, and left a voluminous personal archive recording every bit of it. Famous people constantly cross paths in unexpected ways. Just one example: distraught when her first husband abandoned her in Berlin in 1925, Thompson consulted Sigmund Freud, who offered this timeless cure for heartache: “Buy a new wardrobe and change the colour of your lipstick.”

Hertog, in her acknowledgements, describes this book as a six-year struggle, and it has the choppy feel of a troubled project, perhaps an inevitable result of documenting the lives of two women—friends, though certainly not BFFs—whose lives bumped along on parallel tracks, intersecting only occasionally. So Rebecca gets a chapter, then Dorothy has her turn. Certainly, both women are more than worthy of a biography—but maybe not the same one.