Book by By Bob Spitz 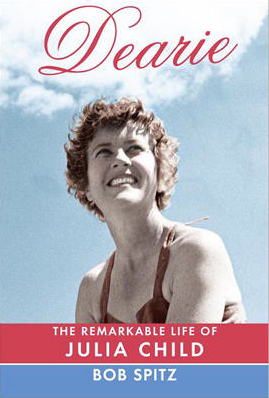 In the nine years since Julia Child’s death, interest in her life has become ever more insatiable, evident in the hit 2009 movie Julie & Julia, a parade of biographies and collected correspondence. And now, timed to the centenary of her birth on Aug. 15, comes Spitz’s exhaustively researched biography that even at 529 pages doesn’t fully contain its irrepressible subject.

Still, it’s a page-turner that places the culinary pioneer in cultural context and delivers some delicious nuggets. For one, Spitz reveals that Child, who dismissed pesticide critics, disliked Meryl Streep ever since the actress spoke out against spraying Alar on apples in the ’80s. Streep, of course, famously played Child in Julie & Julia.

But Dearie, taken from a term Child used with everyone, is more admiring than dishy as it tracks the lifelong nonconformist through her adventurous childhood, her partying days at Smith College, her deployment to Ceylon with the OSS, and her marriage to diplomat Paul Child, who introduced her to France and sole meunière. Spitz transports readers to the Childs’ Paris kitchen as Julia puzzles through mayonnaise and caramelizing onions while researching her 1961 game-changer Mastering the Art of French Cooking. Later, we’re backstage at her public-access TV show, The French Chef, which paved the way for celebrity cookery. Audiences loved Child, a natural teacher and entertainer who merrily broke taboos—drinking wine on TV, making ribald cracks that would be censored today, and even trashing sponsors on air.

Her happy marriage to Paul, whose unflagging support allowed her to shine, is well chronicled but is touchingly told here. Spitz writes that after Paul’s dementia forced Julia to put him in a care facility, she found a gentleman caller for a time, which he attributes to her pragmatism. Certainly Child’s indomitable spirit kept her a workhorse into her 80s. It’s a testament to that, and Spitz’s storytelling skill, that even though we know how Dearie will end, it’s so, so sad when it does.