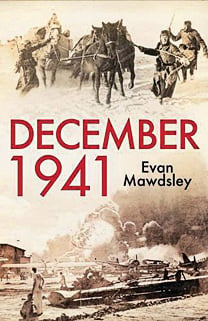 Scholars have been seeking decisive hinge moments in the greatest and most chaotic episode in history ever since the Second World War ended. John Lukacs found one in his marvellous Five Days in London, May 1940 (1999), when Churchill ensured the conflict didn’t end then on Hitler’s terms. Now Mawdsley is focusing on another, less arguable in its claims—the war did indeed go global in his title month 70 years ago—but equally intriguing in its new take on events.

On Dec. 1, 1941, the war was overwhelmingly a European fight. The Wehrmacht still had hopes of taking Moscow and decapitating the U.S.S.R.; Britain had yet to register a major military success; Japan was unchecked in Asia; and American isolationist sentiment remained ascendant. Twelve days later, the world looked very different. In a series of savage counterattacks, the Soviet Union showed it was far from dead—the Nazis’ one-year campaign to destroy it had failed. Britain (and its future Commonwealth) had rallied and in Africa achieved their first significant victory over German forces. Crucially, Pearl Harbor and Hitler’s declaration of war had finally brought the Americans into the struggle. (Churchill famously remarked of Dec. 7 that he had gone to bed and “slept the sleep of the saved and thankful.”) Most sinister of all: December 1941 was the month in which Hitler committed the Nazi state to the genocide of Europe’s Jews.

All of these are well-known facts; where Mawdsley, a historian at the University of Glasgow, shines is in his linkage of events. On a smaller scale, British success in Africa meant shifting Luftwaffe units there, leaving the Nazis’ Russian front weaker. On a higher geostrategic level, both Japan and Germany expected the other to bail it out: the Nazis especially thought war in the Pacific would keep America from European intervention. And since their previous strategy in that regard—essentially holding European Jews as hostages against U.S. power—had failed, Hitler felt free to give full rein to his murderous anti-Semitism.