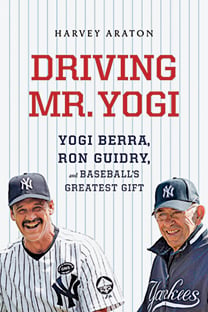 After years of steroid scandals and cold-hearted business decisions, Araton has given us an old-fashioned story about the redemptive power of baseball. The book follows the relationship of two former New York Yankees greats, catcher Yogi Berra and pitcher Ron Guidry. They first met in the ’70s when Guidry was a star and Berra, a generation older, was a coach. But their friendship really blossomed in 1999 when Guidry started driving Berra to the Yankees’ spring training in Tampa, a ritual that turns the two men into a sort of baseball odd couple, with the dignified Southerner Guidry becoming a sidekick to Berra, the ultimate lovable grumpy old man.

Araton, who covers sports for the New York Times, is obviously in love with the Yankees’ traditions of “pomp and pathos,” and enjoys showing us how two old, retired players can still be relevant to those traditions even in a computer-dominated era. We see them disturbed by changes in the game: Berra notes that catchers’ equipment is now “all lightweight and fibreglass stuff,” and Guidry doesn’t like the computerization of baseball (“it seems like we’ve been brainwashed into getting so much information”). But unlike the old players in Moneyball, they’re treated with respect and awe for their old-fashioned ways. “I had this tremendous feeling of being part of the Yankees family, of tradition,” pitcher David Cone recalls of meeting Berra.

There’s also a sad undertone to the story, emphasized by Araton’s decision to start the book with a bad fall Berra took in 2010: Guidry’s bittersweet knowledge that Berra might not be able to keep coming to spring training for long. We also see the prickly, stubborn side of Berra, who refused to talk to Yankee owner George Steinbrenner for 14 years and forced Steinbrenner into an apology. But the overriding theme of the book is Guidry’s fierce respect for Berra’s age and wisdom. When he pushes Berra to give advice to Yankee star Nick Swisher—and Swisher takes the advice—it’s a heartwarming moment; as Guidry puts it, “he was still able to contribute something.”