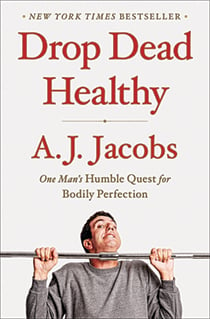 This may be the first book written on a treadmill. After living like Jesus for The Year of Living Biblically, and tackling the entire Encyclopedia Britannica for Know-It-All, the self-improving Esquire magazine writer is on a two-year quest for bodily perfection.

Of course, becoming “the healthiest man alive” involves a wacky range of experiments. Guided by scientific research and expert opinion, Jacobs works through improving every aspect of his physical being, taste buds to toes. In a chapter on the lower intestine, he buys Nature’s Platform, “a squat-aiding apparatus” because sitting strains the bowels and can lead to hemorrhoids. When focused on the stomach, he studies the “chewdiasm” movement and tries to chomp more to increase mindfulness and eat less. Along the way are entertaining asides about his domestic life, and hundreds of quirky pop science tidbits.

But like most consumers of health information, he gets lost in a sea of contradiction. There’s the problem of which diet is best: raw food, no sugar? The former makes him gassy, the latter is “ridiculously hard to sustain.” Unfortunately, Jacobs doesn’t do much to explore the complexity of the science.

Like Bridget Jones on a health kick, the author periodically tracks his progress using metrics such as the number of walnuts consumed and pounds lifted on the squat machine. By the end, he’s a lean triathlete. But he also notices he’s lost something in his striving. He disappoints his kids when he won’t eat their birthday cupcakes, and misses their rites of passage in his hours spent exercising.

In this parody of our scattered, consumerist approach to wellness, one key insight emerges: being healthy is not as complex—or costly—as we sometimes think. Take his experience with the BluePrintCleanse, a pricey juice fast. After the “detox,” he feels angrier and foggier but no better, and concludes the “simplest liquid”—water—is best of all.