REVIEW: Every Love Story is a Ghost Story: A Life of David Foster Wallace 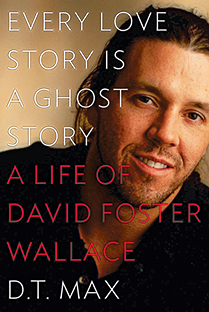 The basic biography of David Foster Wallace is well known: he completed, at age 33, Infinite Jest, a book that became a kind of Catcher in the Rye for Gen-Xers. In 2008, at 46, he killed himself under the growing weight of expectations and depression: “the black hole with teeth,” he called it.

Less well known is just how long and painful that struggle was, and the extent to which Infinite Jest, with its multiple styles, plot lines and loose ends, paralleled phases of Wallace’s life. (One of the book’s key locations, Ennet House, for instance, was a stand-in for Granada House, a halfway house in Allston, Mass., where he spent time.) Max’s enlightening biography is in large part a book about the making and aftermath of Infinite Jest, which covered a period in which Wallace was in and out of institutions for mental health and addiction problems.

Max diligently pieces together Wallace’s life via letters (many of them to Jonathan Franzen and Don DeLillo, writer friends off whom he bounced ideas) and interviews with what seems like everyone Wallace ever met. It’s at times plodding, covering in detail Wallace’s academic and philosophical preoccupations with the meaning of literature. But it also reveals the novelist’s human side. He was a person who had numerous and complicated relationships with women (he once plotted to shoot the husband of someone he was obsessed with), who loved rescued dogs (that ruled his home and ate out of his mouth), and who had a fear of sharks, travel and some elements of American culture, something often at the heart of his best non-fiction writing (A Supposedly Fun Thing I’ll Never Do Again).

While Love Story is mostly for Wallace fans, it’s also a sad tale about an extraordinary life—a tortured artist who fought to do something great, who for a brief time succeeded and found happiness, but who finally succumbed to the problems that had haunted him for so long.