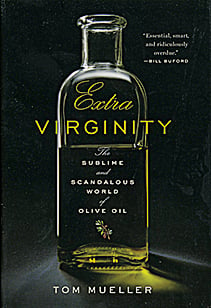 Fast forward some 2,500 years and olive oil is still turning people on—now as a gustatory status symbol and as a source of bountiful antioxidant propenyls via the salutary “Mediterranean diet.” Today’s olive oil industry is as rife with corruption as ever, writes Mueller, who introduces the farmers, marketers, chemists and mobsters who animate it. The “extra-virgin” designation, established in Italy in 1960 to denote the highest-quality oil, complicated matters further. Labelling fraud is rampant; the priciest oil can be adulterated with cheaper oils and “deodorized” to remove bad flavours and inferior aromas. Yet legislation is scandalously lax, to the point that some producers wish for an exposé similar to Italy’s 1986 tainted-wine scandal to force reform.

Mueller, an American journalist based in northwestern Italy, animates his study with fascinating characters and information about what makes an oil great: “pepperiness, fruitiness, and bitterness” being the holy triumvirate. Occasionally the deluge of facts and multiple threads, including Mueller’s own olive oil obsession, reads like a well-written Wikipedia entry. The pruning essential to olive trees, ironically, could have come in handy here. But that’s a quibble. Mueller manages to fuse the poetry and business of olives into a riveting tale that also sheds light on food politics more broadly. The growing legion of olive oil aficionados are destined to adore it, especially the useful index telling them how and where to buy.