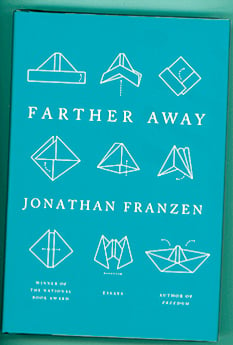 Jonathan Franzen is quite likely the most celebrated and least liked author in America today. His novels Freedom and The Corrections were deliriously praised. But in his non-fiction, whether in writing or in interviews or speeches, he has a way of enraging some readers, especially those online.

Nothing in Farther Away, a collection of essays, reviews and reporting—most of which have already appeared elsewhere—is likely to change any minds. Franzen is, throughout, his usual self: brilliant and erudite but also technophobic, unpleasant and occasionally snide. He’s like a wonderfully insightful friend you love but never want to bring out: you just know that eventually, somehow, somewhere, he’s going to bring you down.

New Yorker readers will recognize most of the longer reported pieces here. There’s one on bird poachers in southern Europe, another on bird watching in China and a long piece on loneliness, Robinson Crusoe and his friend David Foster Wallace’s suicide. Franzen’s address from Wallace’s memorial is also included, as is a 2011 commencement speech from Kenyon College that treads familiar ground: the narcissism of technology and social media, the messy difficulties of real love and why songbirds are really the best. (Seriously, Franzen loves birds.)

Whatever else you think of him, Franzen is without doubt a first-rate critic. And the best pieces in this book are on the writers and books he personally adores. It’s worth the purchase price just to read him on Alice Munro. His reflections on Christina Stead, Donald Atrim and the Swedish detective classic The Laughing Policeman are all essayistic in the best sense: both deeply thought out and wonderfully argued.