REVIEW: Five Days That Shocked the World: Eyewitness Accounts From Europe At the End of World War II 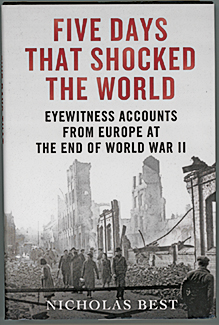 On May 1, 1945, Pte. Josef Ratzinger, 18, abandoned his Wehrmacht post in Bavaria and set off for home. There was an anxious moment when he ran into two soldiers with orders to shoot deserters, but they too, the future Pope Benedict XVI later recalled, “had had enough of war,” and let him go. Aleksandr Solzhenitsyn, always too outspoken for his own good, was in a Moscow prison, while 11-year-old orphan Roman Polanski was playing with grenades on the streets of Krakow. U.S. Army 2nd Lt. Bob Dole, his spine badly damaged by shrapnel, was lying in a hospital bed outside Florence. He had been paralyzed for two weeks, and his doctors expected his imminent death, but the man who would be Bill Clinton’s opponent in a presidential election 51 years later had just managed to wriggle his toes.

Best’s kaleidoscopic tale of individuals caught up in the chaotic final days of history’s greatest upheaval is utterly absorbing, made all the more compelling by the reader’s awareness the people in it just have to last a few days, a few hours more. Many do not, especially the infamous. There’s Hitler, having a last meal of spaghetti with two secretaries, their bizarre conversation focusing on dog breeding, and Mussolini and his mistress strung up by the heels in a Milan square.

But Five Days’ real power lies in the snapshots of moments in the lives of the later famous. Teenaged Audrey Hepburn, for one, starving in Holland with her Dutch mother and now vastly relieved she no longer ran the risk of ending up in an SS brothel. Or that other lieutenant and future leader of his church; Robert Runcie, a decorated warrior known as “Killer” to his men, was leading his three Churchill tanks toward the Bergen-Belsen concentration camp. Thirty-six years later, as archbishop of Canterbury, he officiated at the wedding of Charles and Diana. For all the millions killed in the Second World War, it reassembled the lives of millions more.