REVIEW: Wild: from lost to found on the Pacific crest trail 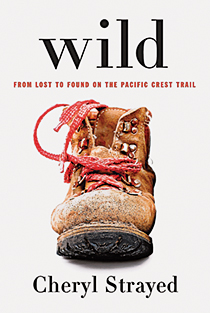 At 22, Strayed loses her mother to cancer. She struggles to cope as her family drifts apart. Her own marriage crumbles. She goes through a string of bad affairs and dead-end waitressing jobs, and dabbles in heroin. At 26, feeling she has nothing left to lose, Strayed decides to hike the Pacific Crest Trail alone, shrinking her life down to what she describes as a path “two feet wide and 2,663 miles long.” Wild is her memoir.

When Strayed steps onto the trail, in the spring of 1995, she’s never done a long distance hike before, and it shows: her pack is so heavy she can barely lift it. (She names it “Monster.”) “I was alone in the wilderness with a beast of a load to carry,” she writes. After a fellow hiker helps pare down her possessions—she gets rid of a foldable saw, a box of condoms, and a giant camera flash—Monster becomes a little more manageable.

Strayed encounters rattlesnakes, bears, and every weather condition from deep snow to scorching heat; she copes with the mundane pitfalls of hiking, like unappetizing camp food, or a wet sleeping bag. And she revels in the beauty of the wilderness around her, in the relationships she builds with other hikers she meets, and in her own solitude. When she finishes at the Bridge of the Gods, between Washington and Oregon, she’s reached no real conclusions about what to do next, but it seems to be enough to trust whatever brought her there. She spends her last $2 on an ice cream cone.