REVIEW: Girl Hunter: Revolutionizing the Way We Eat, One Hunt at a Time 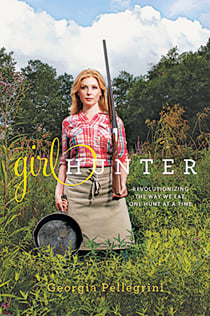 American chef Georgia Pellegrini wanted to get even closer to the meat she prepared in New York’s finest restaurants. Electing to bag her own dinner, the neophyte hunter hit the road to teach the value of self-sufficiency. Girl Hunter is an evocative account of Pelligrini’s gun-to-table experiences. To her credit, she treats every hunting companion and expedition—be it rural Mississippi or England—with an open mind.

It’s an unlikely pairing of Nigella Lawson’s culinary skills and Hemingway’s grit. Long days tracking game are followed by well-earned, upscale dinners. (Each chapter includes recipes.) Pellegrini encounters a fascinating cast of characters on her hunting expeditions. Most of the seasoned American and British hunters are courtly, educated and expert at stalking deer, wild turkey, pheasant, wild hogs, hare, even squirrel. Pellegrini’s only negative encounter is with a rude poacher whom she eludes with the aplomb of a plucky dime-store-novel heroine.

A reader can almost smell the cigar smoke and hear the brandy snifters clink while hunters celebrate the kill. Pellegrini also delves into the tribal mindsets of the hunger-philosophers she meets. “When I’m sitting with men around the fire,” says a Texan, “we often ask ourselves, what is it about this that we like so much? And the truth is that we’re going back. Even though we eat nice food and wear the nice clothing now, it was only two or three generations ago that this is how we provided food for our families.”

For domesticated omnivores who crave the vicarious thrill of the chase, Girl Hunter is a must-read.