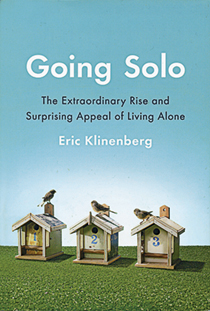 All around the developed world, people are increasingly living alone. In the U.S., that’s 31 million American adults, forming 28 per cent of households, more than any other domestic unit, including the nuclear family. And that’s still short of international levels, including Canada’s: the peak rate is found in social democracies like Sweden, where it reaches 47 per cent of adults.

The growth of living solo has sparked warnings over everything from increased loneliness to the utter collapse of civil society. Klinenberg, a prominent U.S. sociologist who first ran into the phenomenon when investigating the 500 elderly and isolated people who died during a 1995 Chicago heat wave, is well aware of the risk factors. Single old people who lack an active support network—frequent phone calls and visits most importantly—are vulnerable to almost imperceptible health and nutrition declines and to sudden shocks like heatstroke. Women, more skilled and more practised at cultivating social networks, tend to fare much better than men, who often let those relationships slide.

But Klinenberg mostly focuses on the positives, some of which are surprising. Nuclear families tend to hunker down at home, while middle-aged and older singles, socializing together, keep urban amenities going. Art and music classes, public lectures, volunteerism and booming urban condo markets would all wither without them.

Going Solo is most valuable in its repeated emphasis of the obvious. We want to live this way, however much community-minded critics might despair. For unmarried people without children, nothing correlates to living alone more than the economic means. We do it as soon as we can afford to, which is why solo living is a developed world phenomenon. Our governments, Klinenberg argues, would do well to put at-home support programs in place for elderly singletons, because living alone is here to stay.