REVIEW: Heart of Dankness: Underground Botanists, Outlaw Farmers, and the Race For the Cannabis Cup 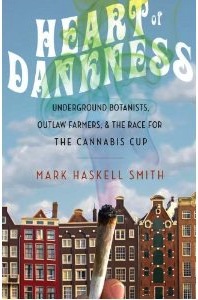 This fascinating plunge into the demimonde of marijuana cultivation is a trip, in every sense. It’s an armchair travel book that ranges from Amsterdam’s coffee shops to a California plantation hidden in a sequoia forest. And it’s a grail quest by a witty American journalist not afraid to inhale. Haskall Smith’s mission is to find the ultimate high, what the cognoscenti call “dankness.” But like the Amsterdam judges who award the annual Cannabis Cup, the Super Bowl of pot appreciation, he faces a paradox: “Would I be too stoned to recognize ‘dankness’ when I found it?”

Smith, a novelist and contributor to the Los Angeles Times, stays straight enough to do some fine reportage. We learn that weed is the new wine, with dizzying varieties of taste, nose and terroir. The two basic cannabis strains are as distinct as cabernet and sauvignon blanc—indica, with its stupifying “body stone,” and savita with its espresso buzz of mental acuity. Then there are the names—such as Himalayan Snow, Green Crack, AK-47, White Widow, Lemon Haze, Trainwreck, Casey Jones and Connie Chung. As Smith tracks down cult-like teams of botanists breeding new strains of superweed, he meets some remarkable ganja gurus—notably Michael Backes, a Los Angeles visionary who helped create sci-fi technologies for Iron Man, Spider-Man and Jurassic Park.

Smith also delves into the politics of pot. He explores the “hippie versus hipster schism” and the sliding scale of legality, with medical licensing and legit seed companies at one end and outlaw growers dodging the feds at the other. Ironically, America’s crackdown on weed has driven farmers to move their crop inside, leading to “a boost in potency and a boom in demand for high-quality genetics.” With a vast cottage industry of high-tech grow ops, a plant “that thrives in almost any climate, in any country in the world, now mostly grows indoors.” The “heart of dankness” remains elusive. But Smith’s road to enlightenment—as much about culture as cultivation—packs a heady contact high.