REVIEW: Hostage: A Year at Gunpoint with Somali Pirates

Book by Paul and Rachel Chandler 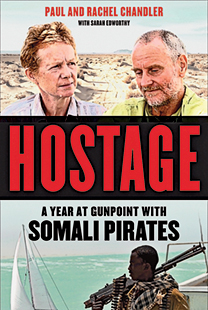 In December 2009, Somali pirates with AK-47s and rocket- propelled grenades interrupted the ocean idyll of a retired British couple on their dream boat. Paul and Rachel Chandler were taken from their 38-foot yacht to the bush of Somalia. Unfortunately for the pirates, their prey were less wealthy than expected, and more pugnacious. The pirates held out for monetary demands that could not be met by the two “elderly paupers” (the British government, apparently, really doesn’t negotiate with pirates) who had no qualms about screaming at the men with guns.

In their minutely detailed account, the Chandlers do disappointingly little to provide context for their misadventure. Why are there so many Somali pirates, and what is their civil war about, anyway? The Chandlers spend more than a year in captivity, but expend little time understanding their captors, even in retrospect. They describe the Somalis as “irrational,” “mindless,” “inhuman”—in short, uncivilized “gangsters” who are too stupid to make good on their greed. The Chandlers descend from impatient hope to despondent despair. Often, they are simply bored. Their policy prescription for dealing with piracy, in their case and those that will inevitably follow, is rather simple: “Kill the bastards.”

The hostage ordeal is prolonged and bizarre. The Chandlers do telephone interviews with international media at the behest of their tormentors. They become the objects of international consternation, but it still takes a year to cobble together sufficient ransom money. In the end, it is not the British government or the extended Chandler family that frees the languishing couple. Rather, they owe their freedom to a British child of Somali origin who complained to his father that he could no longer play football with his mates without being heckled about pirates. The businessman father, who had left Somalia in 1997, returned for six months to pull the requisite strings. Somalis seem capable of some good, after all.