REVIEW: How It Began: A Time-Traveler’s Guide to the Universe 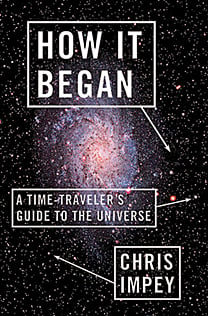 Astronomers are like time travellers. When they study the night sky, they’re really looking back in time, because light from distant stars was emitted long ago—and the deeper into space they look, the further back in time they see. “Light takes millions of years to reach us from the nearest galaxies,” and billions from the most distant ones, writes University of Arizona astronomer Impey. He uses this concept, called “lookback time,” to frame his new book, which takes readers from Earth’s own neighbourhood to the farthest possible place. Starting with the moon, he moves to the nearest star system and on to the black hole at the centre of the Milky Way. He describes distant galaxies, moving further back in time, reaching the “infant universe,” and eventually a hazy era before even the Big Bang.

It’s a fascinating journey. Impey’s book is full of stories about the scientists who helped build our understanding of the 14-billion-year-old universe, and anecdotes about his own time gazing out at it from behind a telescope. It’s peppered with mind-boggling questions, too—like whether there’s life on other planets (he implies the answer is probably yes) and whether our universe is just one of many in the so-called “multiverse.”

Each chapter begins and ends with a short vignette that puts the reader in an otherworldly scene: witnessing the birth of a star, or being sucked into a black hole. One of the vignettes imagines what might happen to a space traveller on Jupiter’s frozen moon Europa. Impey describes an astronaut standing there as the heat from his spacesuit melts the ice. He begins to sink through it, presumably meeting a slow, horrible end.

With Impey flexing his creative writing muscles, How It Began could almost be a science fiction novel. But when he describes what we really do know about the universe—and questions we’re grappling with—it’s even more incredible than anything a science fiction writer could dream up.