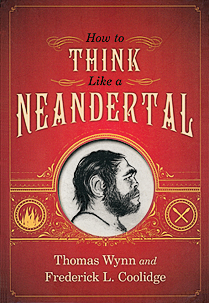 The main point of this absorbing account of our closest-ever relatives, dead now these 30,000 years, is that we already do. Think like Neanderthals, that is. What we know of Neanderthal technology is derived primarily from their stoneworking procedures, because that’s the evidence that has survived. It reveals the very same learning techniques that create modern artisans, musicians and athletes: what’s called embodied cognition (muscle and procedural memory), and practice, practice, practice. Even driving a car, the authors argue, means “thinking like a Neanderthal.” That assertion is vital to Wynn (an anthropologist) and Coolidge (a psychiatrist), who wish to make it clear that Neanderthals are us, and not some sort of hyper-intelligent chimps.

But not entirely us. Our essential kinship established, the authors go on to discuss the behavioural differences clearly revealed by the archaeological record and the far more speculative cognitive capacities that could explain—or result from—those differences. The sexual division of labour universal among modern hunters (males) and gatherers (females) seems absent from Neanderthal life, partly because they consumed so little plant food. Does that mean the sex-linked difference in spatial cognition among moderns—men consistently score better in tests—which some evolutionary psychologists trace to males having to track game across a shifting landscape (while females specialized in memorizing specific, plant-rich locations), didn’t exist among Neanderthals?

Nor did Neanderthals live in groups as large as modern hunter-gatherers do. That may mean they lacked—or never found the need to develop—the working memory, social skills and symbolic thinking required to handle big groups. A large difference in that kind of thinking is a potential factor in what may be the widest gulf of all: compared to us, Neanderthals simply did not innovate. And that is why, in the best current thinking, they are no longer with us. When modern humans showed up in Europe they coexisted for millennia with Neanderthals. But when the ice ages returned and we began to rapidly innovate—that is, act like cold-adapted, big-game hunting Neanderthals—we out-competed them for the resources that had sustained them for 200,000 years.

FILED UNDER: book review bookmarked Frederick Coolidge How to Think Like a Neandertal Thomas Wynn