REVIEW: I Know Who You Are and I Saw What You Did: Social Networks and the Death of Privacy 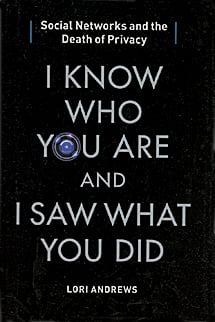 We all know there’s no privacy on the Internet, but we don’t really think about it in terms of how it affects the rights we take for granted. It’s something that Lori Andrews, a law professor at the Illinois Institute of Technology in Chicago, wants us to think about, and that means first of all letting us know just how much we’re being spied on. It’s not just Facebook, which famously makes its money by collecting our information and selling it to potential advertisers; websites everywhere are “harvesting” our online searches. This adds up to what Andrews calls “your digital doppelgänger,” an image of the person you seem to be from your online activity—often a very inaccurate image, but one that can be used to deny you services or jobs. “Virtually every interaction a person has in the offline world,” Andrews warns, “can be tainted by social network information.”

This isn’t the first time new technology has posed a threat to privacy, although in the past, laws were promptly updated to deal with telephones or computer databases. But as Andrews points out, lawmakers and judges have been incredibly slow to change the laws or apply existing ones to the new reality. The result is a system where “according to the courts, the consent of the person whose data is being intercepted is not required.” Once you consent to a website using your information, you give up your right to control how that information is used.

Much of the book is taken up with Andrews’ arguments for a new legal regime to deal with the issues posed by social networking. She proposes a “social network constitution” that will create certain new-media rights (like “the right to connect”) and also protect old ones, such as cracking down on jurors who read about the case on Twitter. Sometimes the book seems a little bit bogged down in pop legalism and statistics about how many words pop up in online discussion threads. But I Know Who You Are provides a succinct introduction to ideas that are going to be a big part of future laws, legal controversies and precedent-setting decisions—and, therefore, are going to make a lot of money for lawyers.