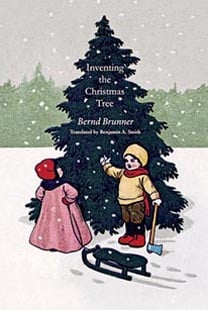 This slim and beautifully illustrated tome is less a history—Brunner cheerfully admits to his subject’s murky origins—than an ode to the Christmas tree’s astonishing and continuing evolution. It’s one thing to find sparse references to the tree within the records of medieval German guilds—the Freiburg Fraternity of Baker’s Apprentices seems to have had one up, complete with apples, gingerbread and tinsel, as early as 1419—and quite another to see an unmistakable Christmas tree in a Japanese print from 1920. In it, a traditionally dressed family eats Japanese food in front of this weird-but-cool foreign thing, hung with origami, lights and paper fans.

It’s hardly surprising that the Christmas tree’s more ancient roots grew among the German guilds—close-knit associations that had money, common indoor space, traditions of communal celebrations and (crucially) nearby coniferous forests. It was a much slower, and occasionally resisted, process to bring it into private houses. First, those homes had to get bigger, and the German upper classes obliged in the 18th century with houses containing purpose-built rooms, like parlours, suitable for family trees. The less well-off responded by hanging their trees, sometimes upside down, from the ceilings of their smaller dwellings, a practice still followed in some German churches.

Even as the tree left its native land with German migration (or by high-level marriage: it was the union of Queen Victoria and Prince Albert that brought the Christmas tree to Britain, where Dickens greeted it as “a pretty German toy”), some traditionalists hesitated. Catholics, focused on the manger tableau, objected to what they saw as the pagan elements of the Lutherans’ “Tannenbaum religion,” a feeling shared by the American descendants of strict Calvinists: “The Puritan blood still flows too briskly in my veins,” wrote New Englander Lydia Maria Child in 1845, “to allow me to relish over much the Christmas tree.”

But there’s something about a light-draped tree, and resistance was hopeless. Throughout the West, homes sport mangers and trees, while the “tree” erected in an Abu Dhabi hotel lobby in 2010—a gold- and gem-studded, 10-m monument to conspicuous consumption—shows the extent of the Christmas tree’s worldwide conquest.