Book by The countess of Carnarvon 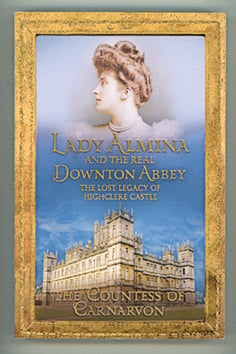 The extravagant Edwardian life featured in the hit TV series Downton Abbey may be fictional, but a real-life version actually existed in the home where it is filmed: Highclere Castle in Berkshire. And, as the current countess of the neo-Elizabethan house explains, that the opulent home is still occupied by the aristocratic Herbert family is largely due to her precedessor, Almina. As the illegitimate daughter of Albert de Rothschild, part of the Jewish banking family, Almina Wombwell was always on the sidelines of society. That changed in 1895 when she married the fifth earl of Carnarvon, George Herbert. Like Downton’s earl, he needed money to sustain his passion for horses, fast cars and archaeology. Though they would eventually fall in love, it was Rothschild’s annual payment—$6.5 million in today’s funds—that sealed the deal.

While Herbert replenished the family coffers, the 19-year-old bride was catapulted to the highest echelons of society. If they’d settled into an ordinary grand life, their story would long have been confined to family memoirs. But Almina and George were anything but conventional. A large part of the book is devoted to her contribution to the Great War. With only 463 military nurses at the beginning of the conflict, Britain desperately needed medical help. So, with money from her father, she converted the castle into a hospital. The countess turned out to be an excellent nurse and administrator who believed in healing patients both physically and mentally. Soon the injured were pulling strings to go to her hospital.

Sadly, the one person she couldn’t save was her husband. In 1923, after years of financing Howard Carter’s excavations in Egypt and weeks after the archaeologist had discovered Tutankhamun’s tomb, Herbert died in Cairo from an insect bite that turned into blood poisoning. He passed away with Almina kneeling by his side, weeping.