REVIEW: Laughing at the Gods: Great Judges and How They Made the Common Law 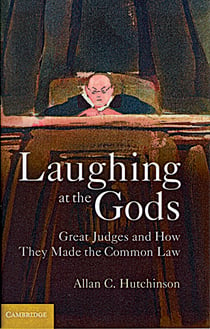 Considering that the roots of the English-speaking world’s legal traditions reach back more than a millennium, it’s manifest that the common law is an organic entity, constantly subject to pruning and updating, mostly by judges. Nonetheless, judicial discretion is always a bone of contention between legislators and judges. Sometimes, as in Canada now, it even becomes a hot political issue, which makes Hutchinson’s book timely indeed.

Hutchinson’s eight great judges run from relative unknowns like Albie Sachs, who retired from South Africa’s Constitutional Court in 2009, to the famous: John Marshall, whose 34-year term (1801 to 1835) as chief justice of the U.S. Supreme Court raised that institution into full equality with Congress and the presidency. Then there is the one Canadian, Bertha Wilson, whose nine-year career on our Supreme Court highlights many of the points Hutchinson ponders as he weighs up the factors that make a great judge.

Some of those factors are not in any individual’s control. Wilson was certainly in the right place at the right time. Prime Minister Pierre Trudeau, seeking a woman and a candidate who shared his individual-rights-based approach to the new Charter of Rights, named her as the court’s first female member only a month before Queen Elizabeth II signed the Charter into law. If Trudeau also wanted someone as unyielding in her principles as he was, he had certainly found her. As well as crafting her share of majority opinions, Wilson wrote more than 80 concurrences—meaning she agreed with the outcome, but not with the reasoning that led to it—and almost as many dissents. Both numbers, Hutchinson notes, are well above the norm. Her work in these areas often bore fruit afterwards, influencing later court decisions.

And that is where Wilson earns her place among Hutchinson’s greats: an ability to convince fellow judges to follow along on the path being blazed is the most important factor he considers. Wilson was lucky in her opportunity, but she made the most of it.