REVIEW: Londoners: The Days and Nights of London Now— As Told By Those Who Love It, Hate It, Live It, Left It, and Long For It 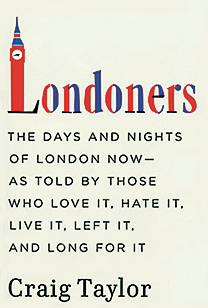 The eccentric cast of characters Taylor assembles from among the eight million inhabitants of the Anglosphere’s great metropolis would—for the most part—happily echo Samuel Johnson’s celebrated declaration that, “When a man is tired of London he is tired of life; for there is in London all that life can afford.” Sometimes, anyway. At other moments every one of them would retort, in the words of another famous Londoner, “Bah, humbug!” That’s precisely the point the author, a transplanted Canadian who is now an entrenched Londoner, wants to make in his vivid portrait of the 21st-century city.

There are 83 interviews here, with people as varied as an airline pilot distinguished by his rare ability to literally see the city as a whole, a proper black-cab driver (naturally) and a Wiccan priestess. Taylor’s skill at inducing his fellow Londoners to actually tell him what’s on their minds is evident, but it’s helped in no small measure by the fact that London is clearly what is often on Londoners’ minds.

A nightclub bouncer revels in its “purple-pinky” light at summer dawns; a street photographer worries the late-to-arrive high-rises are stealing that same light. Almost everyone is concerned with what recent years of riots— both economic and physical—have done to their town. A sour antique restorer thinks the city’s slogan should be, “London: It just gets worse.” A former inhabitant, who fled for rural England, considers London a nest of “Asperger’s people.” But for every one like them there’s another like Ethel Hardy, an East End pensioner who wasn’t at all surprised that two young Asian men sat with her, holding her hand after she fell, until paramedics arrived. Forget Johnson and Dickens—Taylor may have found the most apt summation of his city in the words of a Thames River boatman: “If there is just one London, I have two arses.”