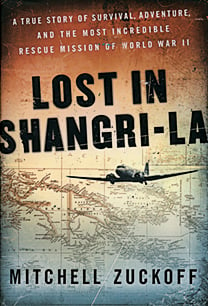 In May of 1945, as the Second World War was winding to a close, two dozen American servicemen and Women’s Army Corps members took off from a supply base in Dutch New Guinea in search of “Shangri-La”—a pristine valley deep in the island’s interior, populated by what was thought to be tens of thousands of pre-contact natives. It was a sightseeing flight, meant as a treat to Americans stationed in a sleepy corner of the Pacific Theatre. But the C-47 crashed in the jungle, and only three survived to fight their way to the open space of the valley floor.

Lieut. John McCollom, Sgt. Ken Decker and Cpl. Margaret Hastings then found themselves at the mercy of stone-age tribesmen who split their time between primitive farming and village-to-village warfare. Thus began a saga that was largely forgotten after the first atomic bombs landed on Japan. Through newly declassified documents, along with interviews and contemporary press accounts, Zuckoff has pieced together the long lost story of the survivors befriending the natives and fighting wounds, burns and gangrene as they awaited rescue. The Dani and Yali were not technically pre-contact peoples, as one group of researchers had made a cursory trip through the valley seven years earlier. Yet only a handful had ever seen a white-skinned human.

The rescue, when it eventually came, was every bit as improbable as the Americans’ survival (hint: it involved gliders), while the resulting press frenzy transformed the trio into reluctant celebrities. The tribesmen, meanwhile, struggled to adjust to the onslaught of Western civilization, as Zuckoff found after travelling to the valley to interview survivors among those who had assisted the Americans. Still, their recollections add considerable poignancy to a grand adventure: they lived, loved and warred, we realize, during the same lifetime as those who unlocked the power of the atom.