REVIEW: Marie Curie and Her Daughters 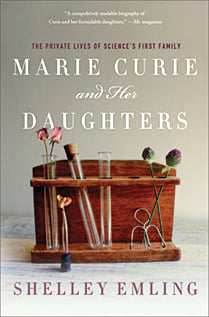 It would be interesting to place this book—about how the woman credited with discovering radium raised her children—on the shelf with today’s parenting books. Mothers who agonize about working out of the home, for example, could take heart. Curie repeatedly left her daughters, Irene and Eve, in the care of nannies or relatives while she travelled across Europe to attend scientific conferences (often as the lone female participant) or X-ray wounded soldiers on the battlefield during the First World War. In spite of these absences, Irene and Eve grew up to be as accomplished as their two-time Nobel Prize-winning mother.

There were bumps, of course. Curie’s younger daughter, Eve, particularly suffered the separations from her mother. In 1911, Curie became a pariah in Parisian society when her affair with a younger, married colleague was exposed. The scandal devastated 13-year-old Irene, who had worshipped her father, Pierre (he died in 1906). Curie’s staunchest supporter, the American journalist Missy Meloney, struggled to accept the scientist’s unconventional lifestyle, telling her readers how much it pained Curie to be away from her daughters. “In fact,” writes Emling, “Marie had made her work a priority and didn’t seem to feel conflicted by her choice.”

Still, intimacy thrived between mother and daughters. Curie’s letters brim with affection (“I am dying to come and hug you”) and knowledge of her daughters’ day-to-day lives. Irene pursued a career in science and, with her husband, Frédéric Joliot, won a Nobel for discovering artificial radioactivity, a massive medical breakthrough. Eve worked as a war correspondent, winning audiences with the shah of Iran and Mahatma Gandhi, and later became known as the first lady of UNICEF. Near the end of her life, Curie told Eve: “I have given a great deal of time to science because I wanted to, because I loved research.” By doing what she loved, Curie taught her daughters that they could too.