Review: Marmee & Louisa: The Untold Story of Louisa May Alcott and Her Mother 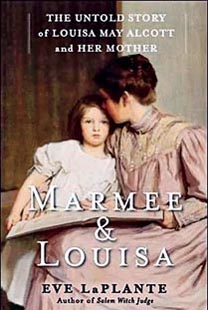 In the spring of 1868, Louisa May Alcott was 35, and not interested in writing books for children. She preferred “melodramatic tales of murder, revenge and interracial love affairs.” But her chief interest was looking after her mother, Abigail, who had brought up four daughters in poverty and continued to live hand-to-mouth with her brilliant but unsuccessful husband, Bronson. So when a Boston publishing house offered Alcott $500 to produce a book for girls, she settled down to write Little Women, the novel that would make her famous and, more important, rich. “Hard times for the Alcotts are over forever,” she announced upon learning that 3,000 copies of the second instalment of Little Women(the two parts later became one novel) had been sold before hitting the shelves. “I feel as if I could die in peace.”

When Abigail lay dying nine years later, she looked up at Alcott and called her “Marmee,” mistaking her second daughter for her own mother. The lines were indeed blurry at times. LaPlante pieces together the letters and journals of Alcott, Abigail, Bronson and other friends and relatives (some of which LaPlante, great-great-granddaughter of Alcott’s first cousin, found in her mother’s attic) to create a portrait of the family. Abigail, stuck in a troubled and often distant marriage, frequently leaned on her daughters for financial and emotional support, and none more than Alcott. By age 8, Alcott was no longer in school, her help too important at home. By 15, she was in the workforce—as a maid, teacher and nanny. By 19, she was selling poems and stories, and gradually became the head of the household.

But Abigail was also central to her daughter’s career. A fierce advocate of abolition and suffrage, she taught her daughters to believe in their own agency. Recognizing in Alcott her own “wretchedness of spirit,” Abigail felt writing could be a “safety valve” for her daughter’s “smothered sorrow.” With tenderness and warmth, Abigail encouraged Alcott to find her voice. Her efforts, echoed in those of Little Women’s Marmee with Jo, helped her daughter deliver one of the most beloved stories of the 19th century.