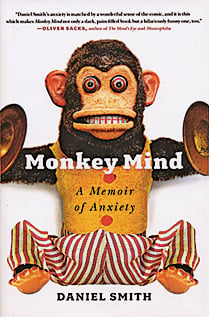 Anxiety has always been comedy gold—just ask Woody Allen. Or Smith, for that matter, whose sweat-soaked descriptions of his panic attacks are appallingly funny: walking to his therapist’s Boston office, he can argue himself into the certainty of his onrushing “death by prostitution” in mere seconds. (“I am anxious . . . so I can’t concentrate . . . so I will make an unforgivable mistake at work . . . I will be fired . . . I will be forced to have sex for money in an alley behind Fenway Park . . . I will contract HIV . . . ”) Whether or not anxiety is the disorder of modern life, as Smith argues, it is a particularly sharp torture for the imaginative.

For all its high entertainment value—Smith’s tales of sticking sweat pads in his armpits to stem a flow that rivalled Albert Brooks’s in Broadcast News, or of how he lost his virginity in a way “even my most depraved friends find unfortunate” (to a middle-aged woman with a predilection for teen boys)—Monkey Mind is at its best demonstrating how anxiety short-circuits rational thought.

Smith takes his title from the Buddhist term for the anxious state. A person with monkey mind might as well have a head full of screaming, bouncing, feces-flinging simians, “swinging from loose neurons like howlers from vines”—Smith in the throes of an attack. In his obsessive search for root causes, he goes to his brother, Scott—a fellow sufferer, albeit in a more physical way (a hypochondriac)—with the tale of how he, Daniel, lost his virginity. Has Daniel forgotten, asks his wide-eyed brother, that he and Scott are the sons of a woman who calls herself the Queen of Anxiety and a father who was hospitalized in his 40s after a series of panic attacks?

Eventually, by giving up on the search for why his mind is sometimes engulfed in flames and concentrating instead on putting the fire out—cognitive therapy, in short—Smith now exerts much more control over his life. He’s far from cured, but learning how to fight has made all the difference.