REVIEW: Mr.Broadway: the inside story of the Shuberts, the shows, and the stars 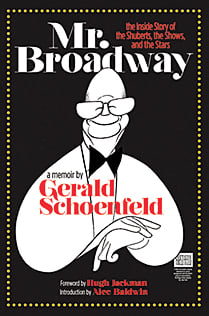 Schoenfeld’s memoir of his decades as a Broadway producer was published posthumously (he died in 2008), but even if he were alive, it would seem like a missive from a lost world of theatre showmanship. Originally a lawyer for the powerful theatre owner J.J. Shubert, Schoenfeld and his partner Bernie Jacobs took over the Shubert Organization in 1972, when Broadway theatre was in a death spiral that mirrored the collapse of New York City: theatregoers were driven away, he writes, by “unsafe streets littered with trash and all kinds of hustlers and criminals.”

Schoenfeld tells us how he and Jacobs helped turn this around by vertically integrating their business: instead of just booking shows into their theatres, they began to produce and invest in the plays. Part of their strategy was to lure “young as well as minority audiences” to Broadway, starting with ’70s smashes like Pippin and A Chorus Line; another part was campaigning for “the revitalization of Times Square,” making New York more attractive for tourists. Much of the book from that point on is a catalogue of hits, from British-invasion shows like Amadeus and Phantom of the Opera to cult favourites like Sunday in the Park With George and The Goat.

Because Schoenfeld was not known as a particularly colourful producer, the book doesn’t abound in juicy anecdotes; the closest he comes to anger is when he complains at length about Nine beating his hit Dreamgirls for the Tony Award. But Schoenfeld helps us understand the business of Broadway and how backward it can be; theatres didn’t even take credit cards until he came along. And he calls attention to the neglect of Broadway by the city and state governments, which subsidize film and TV instead. The “I Love New York” campaign of the ’70s boosted theatre revenue, but “inexplicably, it was not repeated.” Still, the book provides some hope for Broadway: if Schoenfeld helped revive it when it was dead once before, someone else might come along to revive it again.