REVIEW: My Life as a Mankiewicz: An Insider's Journey Through Hollywood 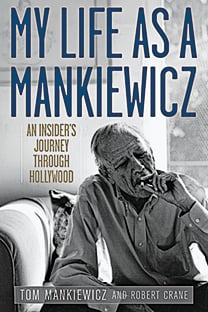 Mankiewicz wrote three James Bond films and the hit TV series Hart to Hart, but by the standards of his family, that put him in the middle of the pack. His father was Joseph L. Mankiewicz, writer-director of movies like All About Eve; his uncle Herman wrote Citizen Kane, and other family members can be found in everything from TV dramas to his cousin Ben Mankiewicz’s hosting gig on Turner Classic Movies. With that kind of family lineage—and with a schizophrenic mother who committed suicide—it’s no wonder insecurity about being “Joe Mankiewicz’s son” is a recurring theme in this book, which he and Crane completed shortly before Mankiewicz died of pancreatic cancer in 2010.

Apart from Mankiewicz himself, who had written a Broadway musical and major films before he turned 30 (“Genetically,” he says, “the Mankiewiczes have something about writing”), the dominant figure in the book is his brilliant father, who used his movies to express “many of the emotions he was somehow unable to express freely in real life.” There are plenty of stories about the love lives of both men. Mankiewicz relates how he lost his virginity on the set of a John Wayne movie, and claims Judy Garland got pregnant by his father and had an abortion: “I can’t prove this, but I know it’s true.”

With the name-dropping of every celebrity Mankiewicz knew, it feels like a collection of anecdotes rather than a full-fledged autobiography. But there are stories about how he shepherded the Bond transition from Sean Connery to Roger Moore, and his rewrite of Superman, which created the template for every superhero movie up to today. If he didn’t take work as seriously as his dad, that was by design: Joe was lost after his retirement because he “never had an interest” beyond movies. Tom took it easier and “found out how much life there was other than in show business.”