REVIEW: Parenting Out of Control: Anxious Parents in Uncertain Times 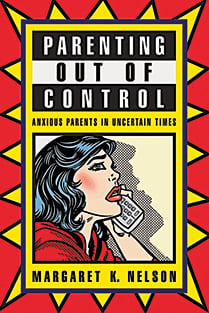 Can you blame it all on baby monitors? That’s one explanation for the modern-day phenomenon of helicopter parenting. Other possibilities include baby boomers who never stopped rebelling against their parents, class competition and lonely single parents looking to be “friends” with their kids.

Sociologist Nelson conducted almost 100 in-depth interviews to uncover the characteristics and motivations of parents who seem unable to let their teens grow up and become independent. Her initial results suggest “smother mothers” (and fathers) are easily spotted by income and education. Parents who incessantly text their teenage kids, intervene with teachers and professors and generally stage-manage their lives are overwhelmingly well-to-do and highly educated. In this way, hovering may simply be a means to maintain class distinctions in an increasingly competitive world. Lower-income parents don’t have the resources to do the same.

Next up are technological reasons. Baby monitors have become a necessity of modern parenting across all incomes. And Nelson finds the patterns these items set in place—the obligation of constant parental surveillance, fear of unknown risks, instant response at the smallest sign of discomfort—to be the same characteristics at play in helicopter parents of teenagers. Baby monitors train parents to “believe it is their obligation to be always available to meet the needs of their infants as soon as those needs are expressed,” she writes. The same goes for cellphones in the teen years.

Then again, there could be deeper psychological needs at work. Nelson also finds that many of her interviewees, particularly those widowed or divorced, view their children as buddies rather than offspring. These parents’ reluctance to discipline their kids or establish expectations of independence may simply be a way to keep them close at hand. Nelson notes this sort of chumminess could also be a way for today’s parents to prove their parenting style is different from that of their own parents—you know, the ones who expected their teenagers to grow up and leave home.