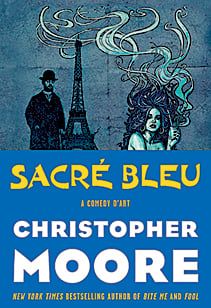 What if Vincent van Gogh didn’t commit suicide, but was murdered by a little old man with a cane and a bowler hat? And what if this murderer—known as the Colorman—were in some nefarious way associated with the history of art and the production of the Old Masters’ paint? Sacré Bleu starts with this oddball premise and gets progressively weirder: it’s a supernatural detective story, an art-historical tribute to the colour blue, and a ribald romp through belle époque Paris—with sidetrips to Michelangelo’s Italy, the building of Hadrian’s Wall, and the Stone Age.

The Ohio-born Moore, known for his bestselling series of “yuppie vampire” books such as You Suck and Bite Me, also rewrites literature and history from the point of view of made-up, or reimagined, minor characters. His novel Lamb introduces us to Christ’s “childhood pal” Biff; Fool is told by King Lear’s Blackadder-like jester, Pocket; and Sacré Bleu shows us the lives of Impressionist and Post-Impressionist painters as seen through the lens of young baker and aspiring painter Lucien Lessard.

Lucien, an idealist in a decadent era, joins forces with Henri de Toulouse Lautrec—in Moore’s hands, a marvellously dissolute comic creation—to look into van Gogh’s murder. While moving through the realms of high art and the dinginess of the demimonde, Lucien and Henri encounter a number of suspiciously perfect muses and explore the sources of artistic inspiration—both aesthetic and priapic. The bleu in the title is both Monet’s ultramarine and the raciness of a blue movie.

Granted, Moore’s enterprise is somewhat silly, but he finds the right mix of homage and off-the-wall irreverence, bringing to earthy life a group of painters whose work is often derided as crowd-pleasing and pretty. But who exactly is the Colorman? We’re not telling. Zut alors!